Creative Partnerships with the UNH Department of Theatre and Dance

Ideas in Action is designed to help faculty bring ideas to life through the power of live performance.

This program infuses the use of scenes from plays and other important texts, as well as interactive theatre pieces, into your classroom or program. In this age of the keyboard class, Ideas in Action is focused on maximizing the energy and effectiveness of the authentic, live classroom experience. Working with faculty from the Department of Theatre and Dance and the student Ideas in Action Ensemble, we will collaborate to shape your proposal into a dynamic teaching tool. Proposals will be accepted on an ongoing basis and selected based on factors including resources and feasibility.

ClassACTion brings short, prepared performances to your class or program. This may include scenes from plays, readings from sources ranging from literature to political speeches, and even the creation of thematic sketches focusing on relevant classroom, seminar, workshop or symposium topics.

The INTERaction program makes use of interactive theatre models to engage students in specially designed simulations. These structures include role play and "activation plays," short scenes created to stimulate dynamic discussion on a variety of subjects. INTERaction can be used for everything from mock trials to interactive plays focusing on topics ranging from ethics and community issues to running effective business meetings and customer service.

The Department of Theatre and Dance will work with departments, programs and faculty to select a play or musical as part of the Theatre and Dance main stage season. This collaborative approach to our production selection process offers the University community an opportunity to add the power of a fully produced stage production to compliment academic programming as well as special events like symposiums and conferences. (Subject to dates designated a year in advance for theatre use on the Paul Creative Arts Center calendar).

END_OF_DOCUMENT_TOKEN_TO_BE_REPLACED

"Ideas in Action" In Action 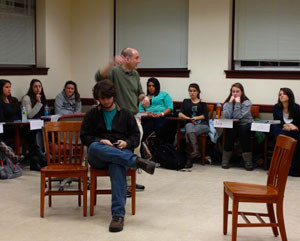 The below comments are taken from Professor Peter Welch's Intro to Women's Studies in February. Ideas In Action, with the help of Wild Acts, theatre for Social Justice, created a play about abusive relationships. They came to class in character, introduced themselves, and then performed scenes from a play they had created with David Kaye on abusive relationships. After each scene, the class was invited to ask questions of each of the characters, as the play unfolded. Here are some reactions from the class participants.

"I am a music major, so I have a fair amount of "artistic" background. That being said, that was one of the most fascinating experiences I've ever had in a UNH classroom. Not only did you and your cast present us with a very interesting plot line, but you gave us, the Women's Studies class, an opportunity to be a part of your production and really dig into some very meaningful discussions. "

"This activity was extremely powerful. I found this play eye-opening and loved how it was a different way to learn. It seemed as though the play had all the aspects necessary to show violence in a relationship and also how to teach prevention and give ideas to what one not in the relationship, can do to help."

"I thought this play was very powerful and gets across how complex abusive relationships can be. I also liked how all the characters were in our age category which made them very relatable."

"I really enjoyed the activity and highly suggest doing it again next semester. Before this class I had a narrow view of abusive relationships. However, the readings for this week really opened my eyes, as did the performance/activity."

"I've been in these characters' position. I have been Ainsley to some extent and I have been Lauren many times. Watching this made me very uncomfortable in so many great ways. I realized things about my relationships. I wanted to jump up and be a part."

"I thought it was awesome to combine the two classes. I felt that the class really enjoyed it. I thought it was cool that we could learn from each other and in such a fun way! I prefer learning through characters like in the plays and readings about women's' stories. I greatly enjoyed this experience." 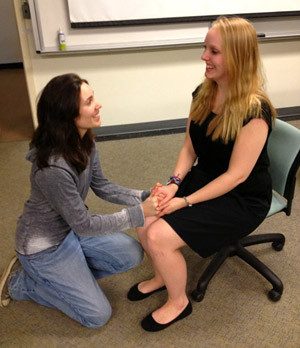 On February 1, Ideas in Action program partnered with Professors Douglas Lanier and Rachel Trubowitz's Shakespeare Lab to perform a scene from As You Like It.

"Ideas in Action provided our Shakespeare classes with an experience of live Shakespearean performance and an open-ended Q&A of actors that one just can't get any other way. We're very grateful for the opportunity to connect our students with the excitement, risks, joys and challenges of live theater." 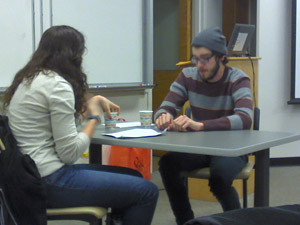 Theatre majors Amy Desrosiers and Spencer Benson perform two scenes created for Professor Drew Christie's Logic Class entitled "The Fallacy Café." They play two students who meet for coffee each week where they engage in discussions and arguments that are riddled with fallacies. Students in Professor Christie's class are charged with spotting and identifying the various fallacy forms used by the two characters.