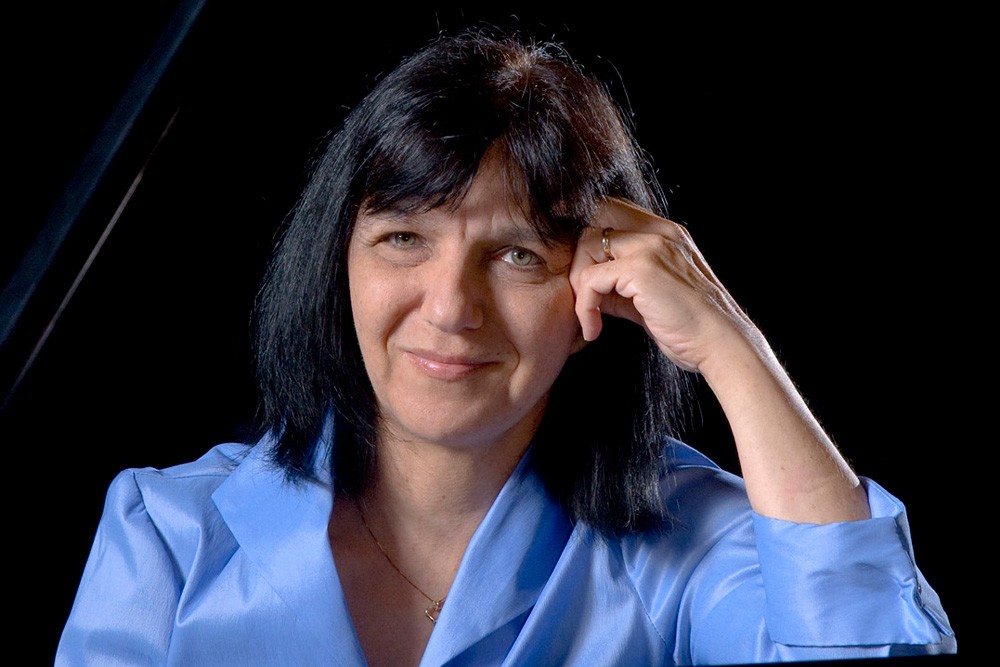 Established in 2017, the Arlene Kies Piano Recital and Master Class Series offers two guest pianist(s) performances annually along with master classes for piano students. Arlene Kies was a Murkland Lecturer in Music at the University of New Hampshire, where she was a devoted faculty member for twenty years (1995–2014). Kies was recognized both within the University and at the national level for her teaching: she was a recipient of the University’s College of Liberal Arts Excellence in Teaching Award and received the Kennedy Center/Stephen Sondheim Inspirational Teacher Award. As an artist, she performed nationally and abroad as a soloist and chamber musician. All series events are free and open to the public. 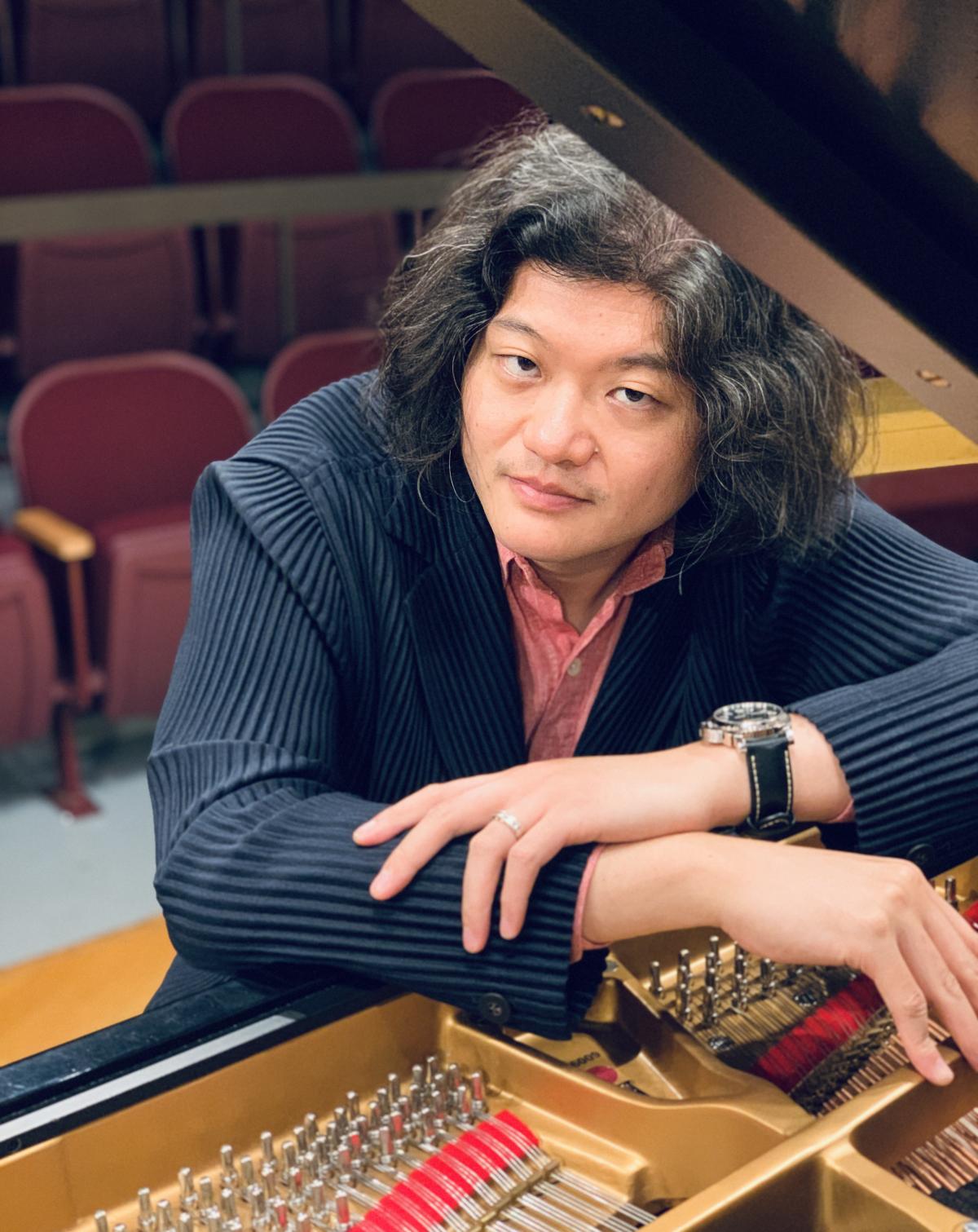 Praised by The New York Times for his "eloquent sensitivity," The Boston Intelligencer for his "impeccable technique," and Fanfare for his “Chameleon-like ability to move between composers,” pianist Hsiang Tu has graced the audience with his creative programming and wide range of repertoire. Dr. Tu is currently working on the complete cycles of piano solo works by Claude Debussy and Maurice Ravel and thematic recitals featuring animal-themed music. Born in Taipei, Taiwan, he debuted in New York at Alice Tully Hall in Lincoln Center as the winner of The Juilliard School Concerto Competition and he has performed in venues all over the world, including the Museum of Modern Art in New York, Banff Centre for Arts and Creativity, National Museum Cardiff, and National Recital Hall in Taipei.

A prize winner at the New Orleans International Piano Competition, the Iowa International Piano Competition, and the American Paderewski Piano Competition, Dr. Tu has appeared with the Calgary Philharmonic Orchestra, Louisiana Philharmonic Orchestra, Sioux City Symphony Orchestra, and the World Civic Orchestra, among others. He has given masterclasses throughout the U.S., including the University of Southern California, Penn State University, and Peabody Conservatory Preparatory Division. Tu recently completed a short residency as a visiting professor at the University of Taipei and released an outreach video, "The Ivory Menagerie," that features interviews and performances of him on animal-themed music in both English and Chinese.

Before being appointed as an Assistant Professor of Piano at Virginia Tech, Dr. Tu taught at the University of New Hampshire, Utah Valley University, and Snow College. He studied with Hung-Kuan Chen, Jerome Lowenthal, and HaeSun Paik, and holds a B.M. in Piano Performance from the University of Calgary and an M.M. and D.M.A. in Piano Performance from The Juilliard School. His debut solo CD, Bestiary on Ivory, has recently been released by Bridge Records. For more info, please visit hsiangjohntu.com. 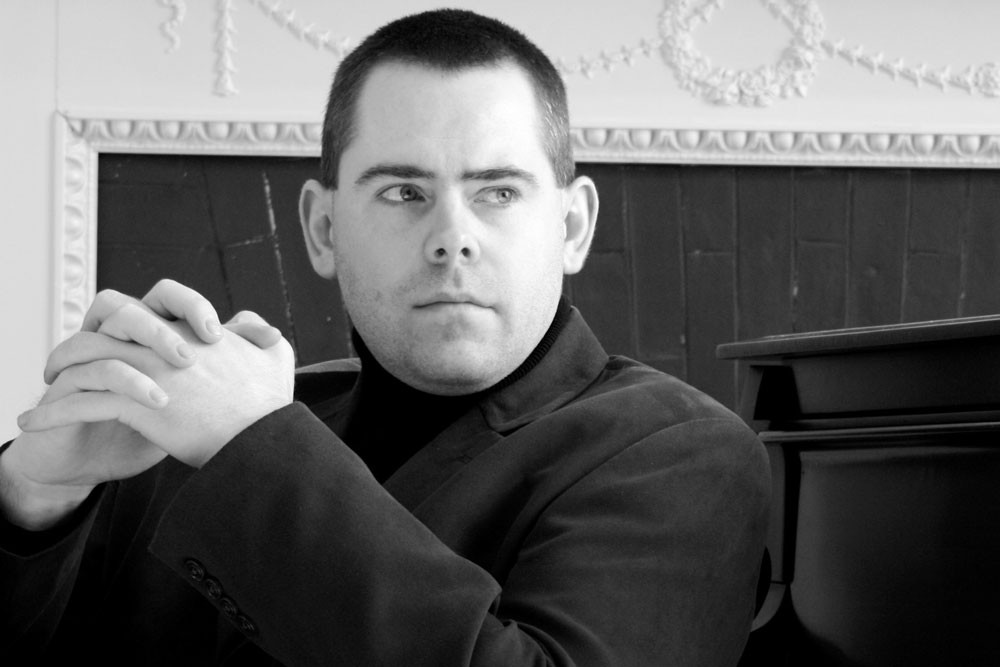 A rising star in the piano world, American pianist Chad R. Bowles is increasingly recognized as a master of his instrument and routinely hailed for an ideal combination of innate musicianship and stunning virtuosity. Equally at home with lesser-known gems, as well as the standard repertoire, his performances have brought him to cities across the United States, Canada, and Europe. His numerous recital appearances as a soloist have seen him in venues including many colleges and universities in the United States, the Kennedy Center in Washington D.C., and the La Gesse Festival in France. Mr. Bowles frequently performs benefit recitals and one-hour long concerts which bring classical music to new audiences, in addition to creating an appreciation for some of the forgotten areas of the piano repertoire. A New England native, Mr. Bowles holds a Bachelors degree in Piano Performance from the University of New Hampshire and both a Masters degree and the Graduate Performance Diploma from the Peabody Conservatory in Baltimore, Maryland where he served as a teaching assistant in the Keyboard Studies department. His primary teachers include Arlene Kies, Frederick Moyer, Alexander Shtarkman, and legendary American pianist Earl Wild. He makes his home with his wife and young children in Baltimore, Maryland, where he is full-time artist faculty and Chair of the Piano Department at Peabody Preparatory and the Co-Director of the Peabody Piano Academy. 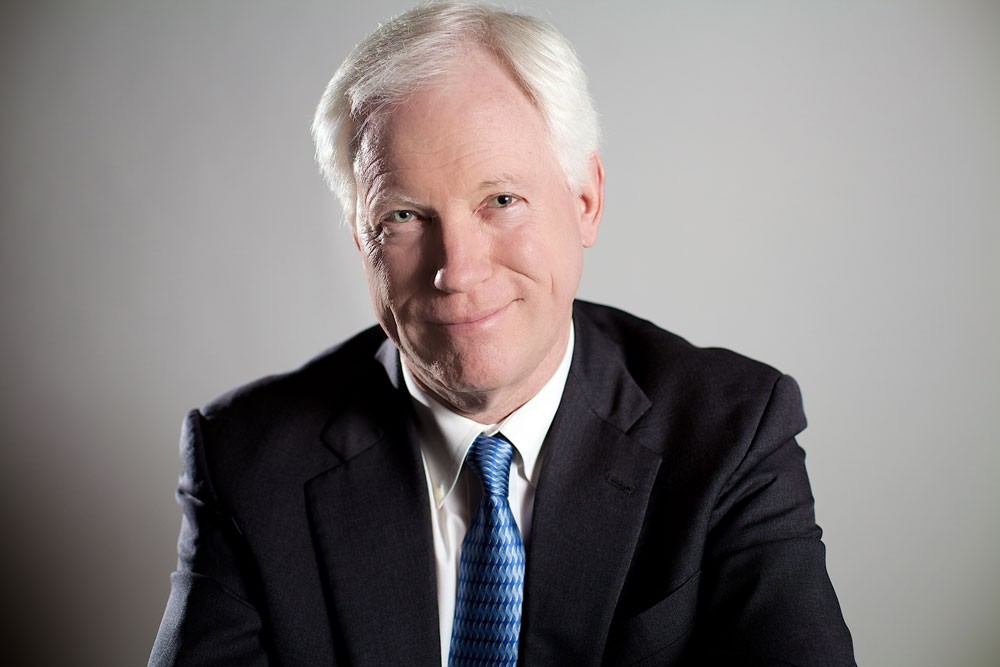 Pianist John Salmon has distinguished himself on four continents, as both a classical and jazz artist.
In the United States, he has given recitals for the Dame Myra Hess Series in Chicago, the Discovery Series in Indianapolis, the Van Cliburn Foundation in Fort Worth, and a Busoni Gala at Symphony Space in New York. He has also appeared as recitalist at many colleges and universities across the United States, including Tulane, Vanderbilt, Cincinnati College Conservatory, and San Francisco State University. His broad repertoire covers the classics – Mozart, Beethoven, Schubert, Schumann, Brahms – though his involvement with contemporary music is equally strong. Salmon has championed and been at the forefront of performing new works by such celebrated composers as Dave Brubeck, Nikolai Kapustin, and Lalo Schifrin.

John Salmon has been a member of the faculty of The University of North Carolina at Greensboro School of Music since 1989. He holds the Doctor of Musical Arts degree from The University of Texas at Austin; the Master of Music degree from The Juilliard School; the Solistendiplom from the r Musik, Freiburg, Germany; and the Bachelor of Music and Bachelor of Arts (philosophy) degrees from Texas Christian University. His awards include the Premio Jaén (1979), the Gina Bachauer Award from Juilliard, a fellowship from the Beethoven Foundation (known nowadays as the American Pianists Association), and prizes from the 1979 University of Maryland (William Kapell Competition) and 1984 Busoni competitions. He was born in Fort Worth, Texas in 1954. 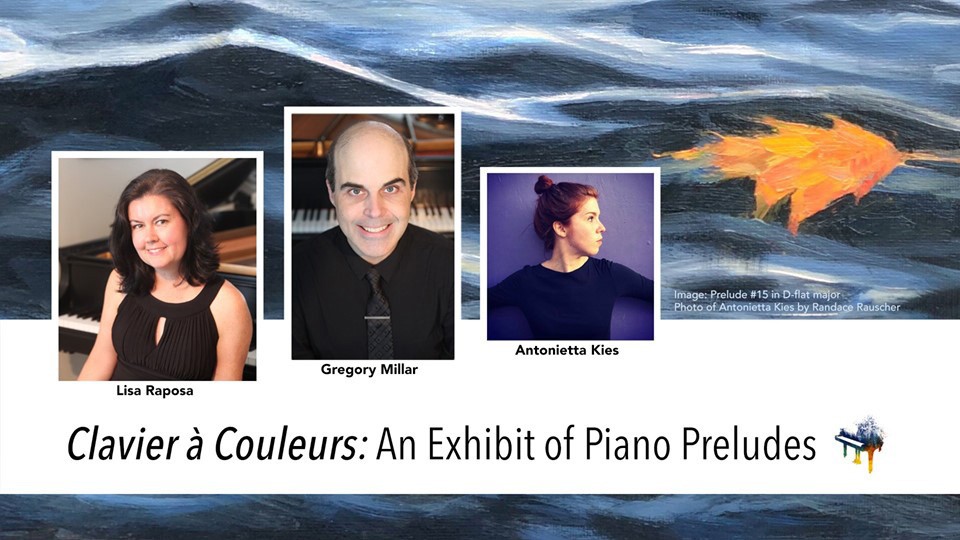 The Arlene Kies Piano Recital and Master Class Series and University of New Hampshire Department of Music brings Toronto-based pianists Gregory Millar and Lisa Raposa (Millar Piano Duo) and artist Antonietta Kies to Durham to present "Clavier à Couleurs: An Exhibit of Piano Preludes".  Part art exhibition and part concert, this event will feature a performance of 24 Preludes, Op. 11 by Alexander Scriabin, and 24 Preludes, Op. 28 by Frédéric Chopin.  Additionally, a new series of 24 landscapes by Kies will be receiving their first US public exhibition.

Clavier à Couleurs: An Exhibit of Piano Preludes successfully premiered at Heliconian Hall in Toronto on November 23, 2019.  The US event will take place in the Bratton Recital Hall of the Paul Creative Arts Center (30 Academic Way, Department of Music at the University of New Hampshire in Durham) on Monday, March 23 at 8:00pm, and include a "Session with the Artist."  Admission is free and open to the public.

Kies' paintings, collectively titled "Poetics", take Scriabin's music as their inspiration.  The artist captures on canvas a personal response to the mood and emotional content suggested by each prelude.  During the performance of Scriabin's pieces by Raposa, images of the paintings will be projected, giving the audience the opportunity to contemplate the connections between the art and the music. Following a brief intermission, the evening will conclude with Millar's performance of Chopin's piano preludes, the collection upon which Scriabin modeled his own.  This will be accompanied by projections of descriptive titles penned by German pianist and conductor Hans von Bülow and French pianist Alfred Cortot that will invite audience members to paint their own pictures in their imaginations as they listen. Music and art are strongly interconnected for Kies, having grown up with two pianist parents:  "When I listen to music, I am one of those people who tends to space out a little, daydream... I inevitably start seeing pictures and thinking about feelings that the music relates to, so it all blends together for me".

The Millar Piano Duo are also a husband-and-wife team and are both graduates of the Eastman School of Music.  They have presented concerts and workshops in Canada and the US, normally playing together in music for four-hands on one or two pianos.  Millar comments on the interesting departure they take for this project: "The two solo piano works are formally and stylistically related, yet we can give them individual interpretations.  Bringing Antonietta into the mix adds a third layer of perspective.  The result is a unique kind of ensemble performance." 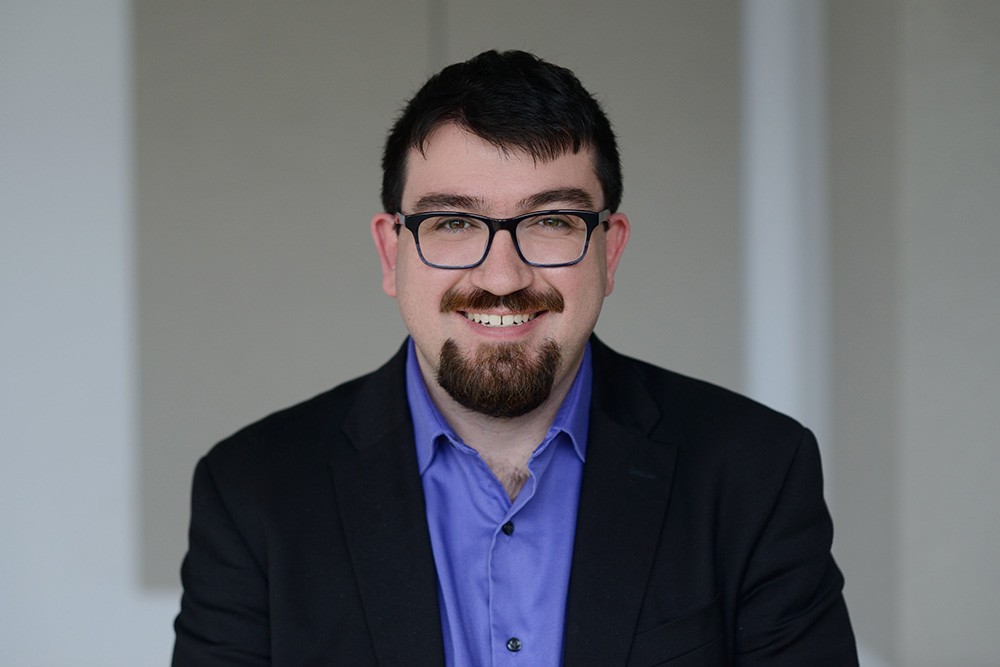 Richard Masters is a soloist, opera coach, chamber musician and orchestral pianist based in Blacksburg, VA, where he is an assistant professor of piano and collaborative piano on the music faculty at Virginia Tech's School of Performing Arts. Significant collaborations include concerts with Grammy-winning baritone Donnie Ray Albert, flutist and composer Valerie Coleman, Colombian mezzo-soprano Marta Senn, and the late Metropolitan Opera mezzo-soprano Barbara Conrad. He has appeared with former Boston Symphony principal trombonist Norman Bolter, former Juilliard String Quartet violinist Earl Carlyss, saxophonist Harvey Pittel, and under the baton of the late Lorin Maazel. Masters has performed solo, chamber and vocal recitals throughout the U.S. and in Europe. As a solo pianist, Masters plays a wide variety of standard and non-traditional repertoire, including contemporary pieces written for or commissioned by him. A strong proponent of contemporary American composers, he has performed world premieres of pieces by Valerie Coleman, Kenneth Frazelle, Jon Jeffrey Grier, David Conte, and many others. He is also an enthusiastic performer of British music from the early 20th century, focusing in particular on the solo piano music of John Ireland. The critic John France wrote on MusicWeb International "Richard Masters approaches [John Ireland's Piano Sonata] with great style and understanding: all the facets of Ireland’s art are present here: ‘…the lyrical, the dramatic, the extrovert and the melancholy – the intense self-questioning and the open, almost naïve, avowals.’" Masters’s recording of music by Australian composer Percy Grainger and his British contemporaries is available on Heritage Records. Before joining the faculty at Virginia Tech, Dr. Masters was principal opera coach for the Butler Opera Center at the University of Texas Austin. Dr. Masters is a Yamaha Artist. He holds degrees from the Eastman School of Music (DMA), the Juilliard School (MM), and the University of Colorado at Boulder (BM). He lives in Blacksburg with his husband Matthew, their daughter Alice, and a pug named Coleslaw. For more information, please visit www.richard-masters.com. Free and open to the public. 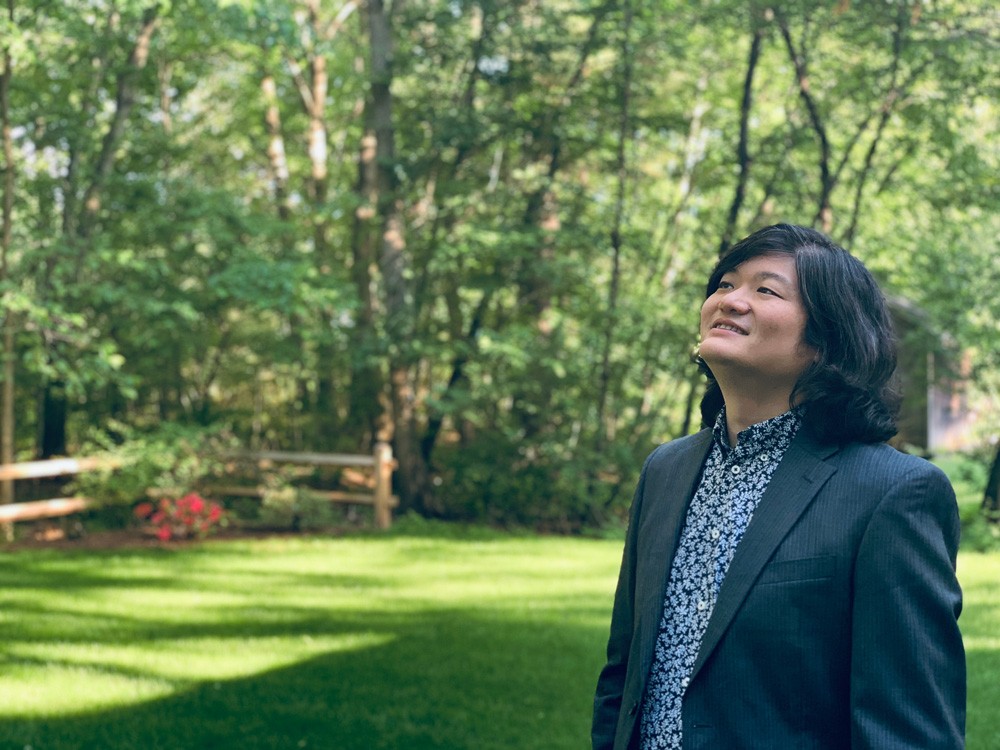 Praised by The New York Times for his "eloquent sensitivity" and The Boston Intelligencer for his "impeccable technique," pianist Hsiang Tu has graced the audience with his creative programming and wide range of repertoire. Hsiang is currently working on the complete cycle of piano solo works by Claude Debussy and Maurice Ravel and thematic recitals featuring animal-themed music and opus-one compositions. Born in Taipei, Taiwan, Mr. Tu has performed twice as concerto soloist at Alice Tully Hall in Lincoln Center and appeared in venues all over the world, including the National Museum Cardiff, National Recital Hall in Taipei, Banff Centre for Arts and Creativity, and Museum of Modern Art in New York. During the 2019-2020 season, Hsiang Tu has been a recitalist at the New England Conservatory, Beethoven Festival Park City, University of North Carolina Greensboro, Utah Valley University, and Wolfeboro Friends of Music in New Hampshire. A prize winner at the New Orleans International Piano Competition, the Iowa International Piano Competition, and the American Paderewski Piano Competition, Hsiang has appeared with the Calgary Philharmonic Orchestra, Louisiana Philharmonic Orchestra, Sioux City Symphony Orchestra, and the World Civic Orchestra, among others. He has given master classes at Cardiff University, University of Southern California, Penn State University, Loyola University New Orleans, Utah Valley University, and Colorado Mesa University, and adjudicated in New Hampshire Music Teachers Association and Virginia Music Teachers Association competitions. Before being appointed as an Assistant Professor of Piano at Virginia Tech’s School of Performing Arts, Mr. Tu taught at the University of New Hampshire, Utah Valley University, and Snow College in Utah. He studied with Hung-Kuan Chen, Jerome Lowenthal, and HaeSun Paik, and holds a B.M. in Piano Performance from the University of Calgary and an M.M. and D.M.A. in Piano Performance from The Juilliard School. For more info, please visit hsiangjohntu.com.