Each year, the festival attracts jazz groups from 55-60 high schools  throughout New England and New York. Performing groups include high school big bands, jazz combos, jazz choirs, as well as solo vocalists. All groups are adjudicated and given written and recorded comments. 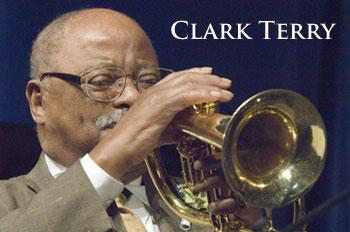 Clark Terry was an affiliate professor of music at the University of New Hampshire. He had a 40-year relationship with the institution. Music Professor Dave Seiler brought Terry to UNH in the mid-1970s to headline his new jazz festival. Thus started a long friendship between the two and an ongoing affiliation, with Terry returning to UNH annually to perform and record with scores of UNH students and faculty members. Terry led student tours of Europe and, in 1976, fronted the UNH Jazz Band that became the first college ensemble ever to play on an evening bill at the famed Montreaux Jazz Festival in Switzerland. UNH awarded Terry an honorary doctorate, his first, in 1978, and the Pettee Medal in 2002.

An obituary in the Boston Globe explains Terry's impact on the world of jazz and jazz education.

"He left a real lasting impact on kids," David Seiler, director of jazz studies at UNH, told the Globe. "I've had all kinds of people here doing clinics, but nobody tops him. He inspired kids so readily."

Seiler added that Terry "exuded joy through his instrument" and that when he taught young musicians, "he'd say, 'The purpose of the clinic is the perpetuation of the jazz language.' He always said that. Even in his 90s he was inspiring people."

Terry was recently in the public eye thanks to a documentary about him released last year. Called Keep On Keepin’ On, the critically-acclaimed film by Alan Hicks examines the relationship between the trumpeter Clark Terry and the young pianist Justin Kauflin.

More information on Terry can be found in the New York Times tribute: Clark Terry, Master of Jazz Trumpet, Dies at 94.