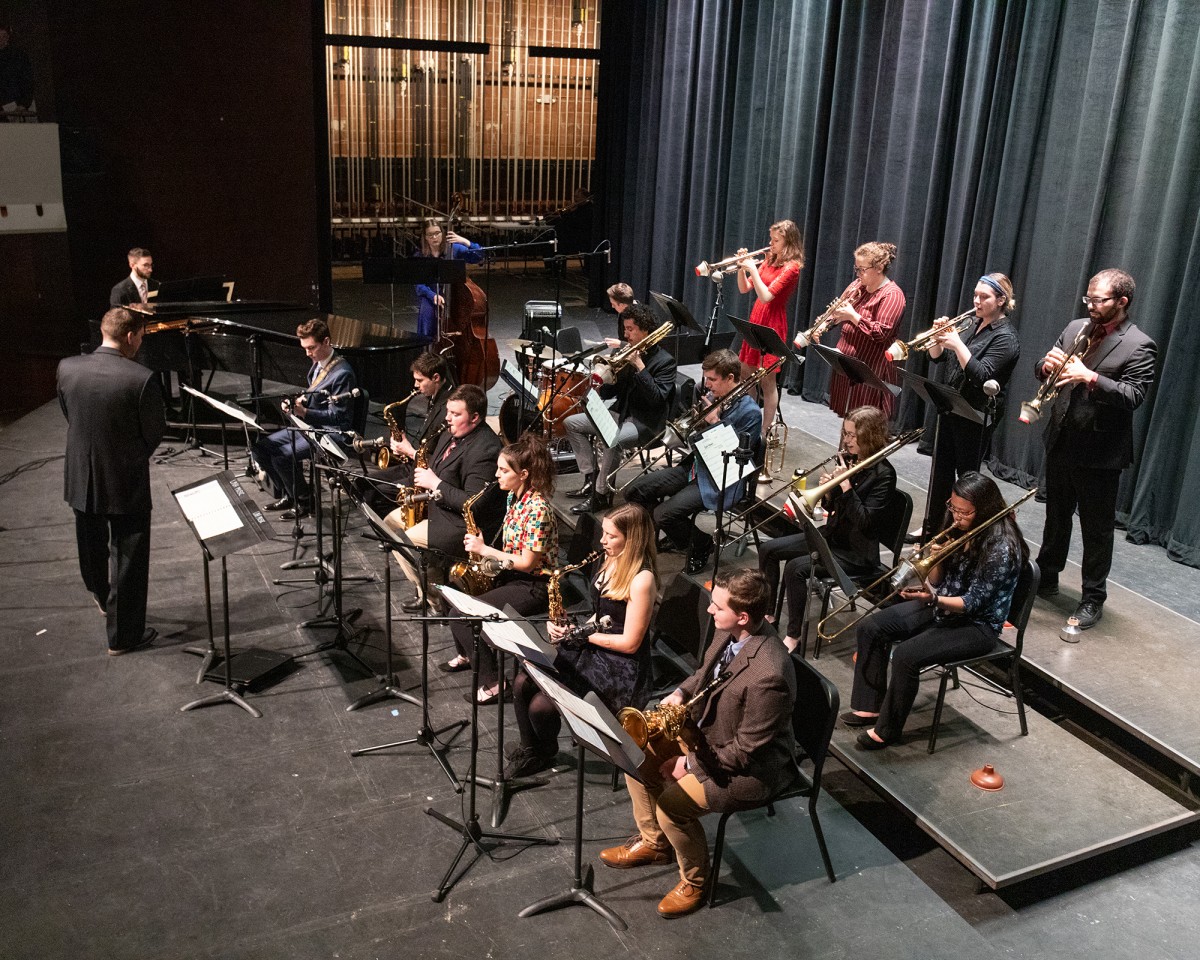 The two jazz bands use standard instrumentation: alto, tenor, baritone saxophone, trumpet, trombone, piano, bass (usually upright), guitar, and drums. A set number of players are accepted each year. A meeting for all interested musicians is held the first week of classes each fall, and audition groups and times are set for the second and third weeks. The top UNH Jazz Band rehearses 3:10-4:00 on Mondays, Wednesdays, and Fridays. The second band rehearses right after them: 4:10-5:00. Spots are filled as needed second semester, but typically membership is for the full year. 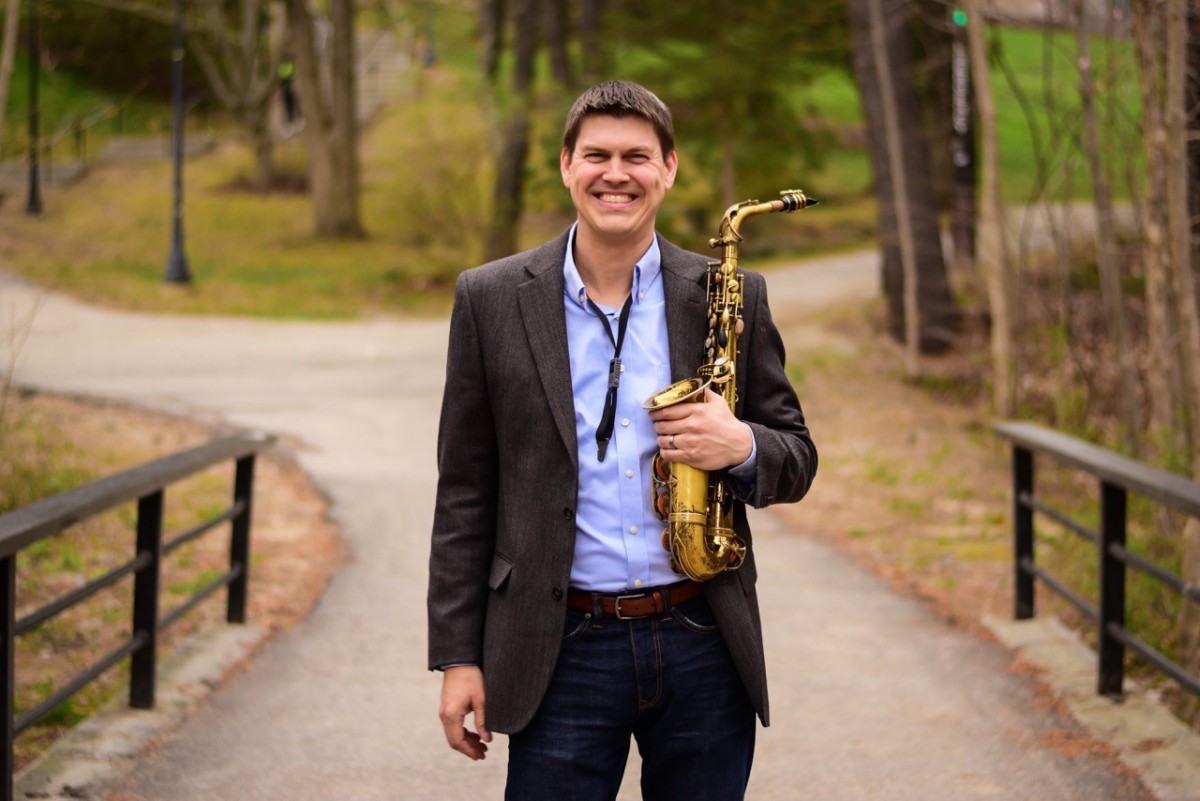 Dr. Nathan Jorgensen is director of jazz studies at the University of New Hampshire (UNH) where he is responsible for teaching applied saxophone lessons, directs two jazz ensembles, serves as administrator and coordinator of the Clark Terry Jazz Festival, and is the producer of the UNH Traditional Jazz Series. Jorgensen is an accomplished jazz and classical saxophonist and feels at home in nearly every musical situation. He has had the opportunity to share the stage with notable jazz performers such as Terell Stafford, Bobby Watson, Bobby Shew, Gary Foster, Bob Sheppard, and many others. His classical performing has allowed him the opportunity to perform with the Kansas City Symphony, the South Dakota Symphony, the Dakota Wind Ensemble, and he has been featured as a concerto soloist with the Dakota Wind Ensemble, South Dakota State University Symphonic Band and the University of New Hampshire Wind Symphony. Jorgensen is also an active proponent of new music. He has given numerous premieres and commissioned several works as an individual and as part of consortiums. He has collaborated extensively with Dr. Aaron Ragsdale, who is the Associate Professor of Percussion at South Dakota State University. Their saxophone and percussion duo has performed more than a dozen recitals in 6 different states over the past several years. Their first CD, A Miraculous Tale: Mixed Music for Percussion and Saxophone, was released by Centaur Records in March of 2017. As a director, Jorgensen’s ensembles have had the opportunity to share the stage with notable performers such as Chris Potter, Donny McCaslin, Bob Sheppard, Bobby Shew, Gary Foster, Victor Lewis, and many others.

At UNH Jorgensen regularly hosts residencies by some of the top performers, composers and historians in jazz today. As director he started an annual commissioning project dedicated to his predecessor, Dave Seiler. His bands have premiered new works from composers such as John Clayton, Dan Gailey, John LaBarbera, and Paul Kreuger. The UNH 3 O'Clock Jazz Band released their first CD under Jorgensen's direction in April of 2016 titled A Time Of Celebration, and the album featured two of the compositions from the Seiler Commissioning Project. Recently the UNH 3 O'Clock Jazz Band was invited to perform at the Montreux Jazz Festival in Montreux, Switzerland, and the Umbria Jazz Festival in Perugia, Italy. Prior to his appointment at UNH, Jorgensen served as Assistant Professor of Woodwinds and Jazz at South Dakota State University.

Jorgensen is in demand as a performer, clinician, adjudicator, and lecturer. He has performed by invitation at regional and national conventions for professional organizations such as the North American Saxophone Alliance, College Music Society, and the National Association of College Wind and Percussion Instructors. He is currently a member of the Capitol Jazz Orchestra based in Concord, NH, and is lead alto of the Portland Jazz Orchestra, based in Portland, ME. He does freelance work throughout New England and can regularly be heard performing in a variety of settings in the Seacoast region. Jorgensen holds a DMA from the University of Kansas, a Master of Music from the UMKC Conservatory of Music and Dance, and a Bachelor of Music from the University of Kansas. His teachers