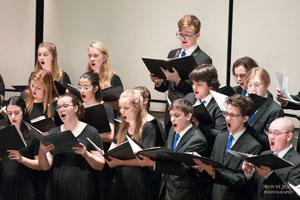 Chamber Singers is a small auditioned SATB chorus specializing in unaccompanied choral repertoire. Choral experience and strong skills in sight-singing and musicianship are recommended. This group performs many outreach concerts in addition to four standard programs annually.  The Chamber Singers rehearse Monday, Wednesday and Friday from 11:10 to 12:30 p. m. 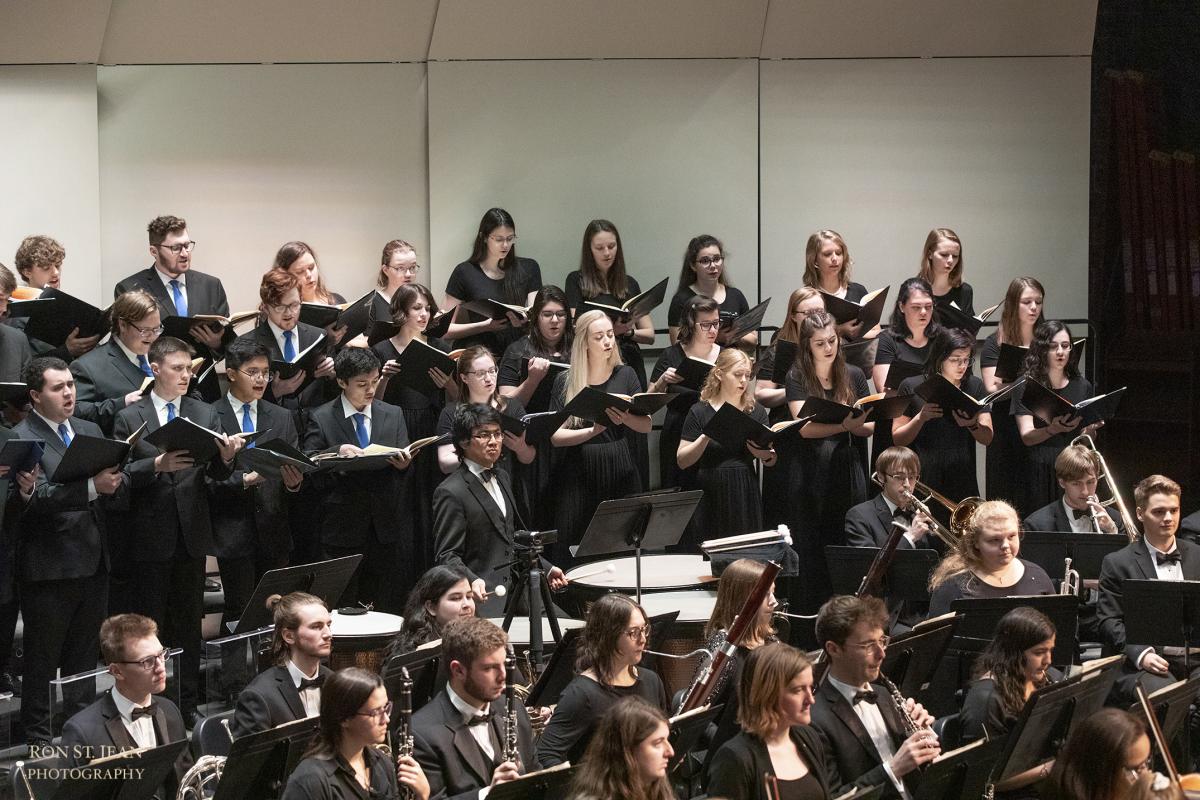 The Concert Choir is a large, un-auditioned, SATB chorus specializing in the performance of choral art-song, masterworks, and symphonic choral repertoire. Open to all students. This choir performs four programs annually and rehearses Monday, Wednesday, and Friday from 4:10 – 5:30 PM. 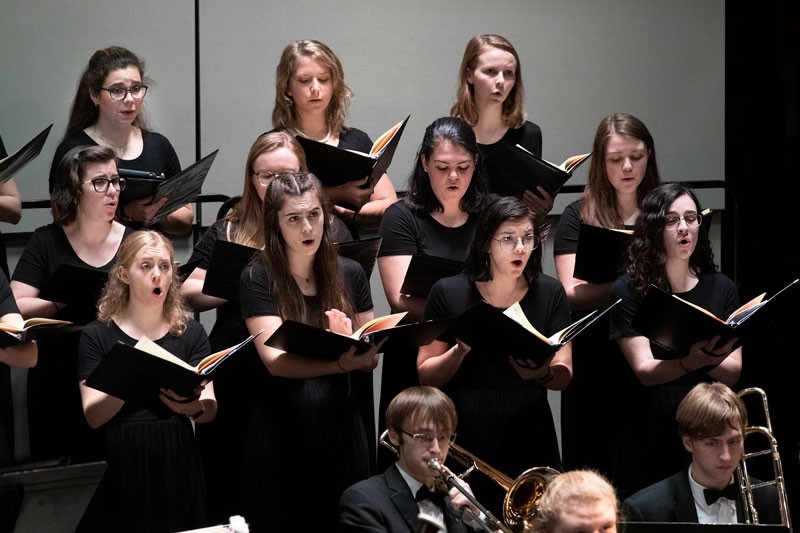 The Treble Choir is for sopranos and altos (SSAA) and meets Tuesdays and Thursdays from 11:10 AM - 12:30 PM in M-128. This ensemble will perform one concert per semester. No audition is required to sing in the Treble Choir. The course name in the Time and Room schedule is MUSI 595 05 - Special Topics in Music Literature, Spc Top Women's Choir. 1 credit hr. Alex T. Favazza, Jr. is director of choral activities and lecturer in music in the Department of Music at the University of New Hampshire where he conducts the Chamber Singers and Concert Choir and teaches Techniques and Methods in Choral Music. His research interests include choral literature, Estonian choral music, and music education.

Favazza earned his Ph.D. in music education and choral conducting from Florida State University where he studied with André J. Thomas and served as assistant conductor of the Tallahassee Community Chorus (TCC). During his time with TCC, the group received the American Prize in Choral Performance and Favazza was a finalist for the American Prize in Choral Conducting. While at Florida State, Favazza also served as a fieldwork supervisor in music education for preservice teachers. In 2017, Favazza was selected as a fellow for the Chorus America choral-orchestral masterclasses in California where he conducted members of the Los Angeles Philharmonic and the Pacific Symphony.

He received his M.M. in choral conducting from the University of Southern Mississippi in 2015 and his B.M.E. in vocal music education from Middle Tennessee State University in 2009. Favazza is a native of Tennessee where he taught public school choir in Memphis, Tenn.

As a composer, Favazza’s choral works are published by Hinshaw Music and Colla Voce Music. His compositions have been performed by several all-state and regional honor choirs as well as collegiate, high school, community and church choirs throughout the United States.

Favazza, baritone, is active as a singer and has recently performed with professional groups such as the Tallahassee Bach Parley and Chamber Choir. He is also an active church musician. 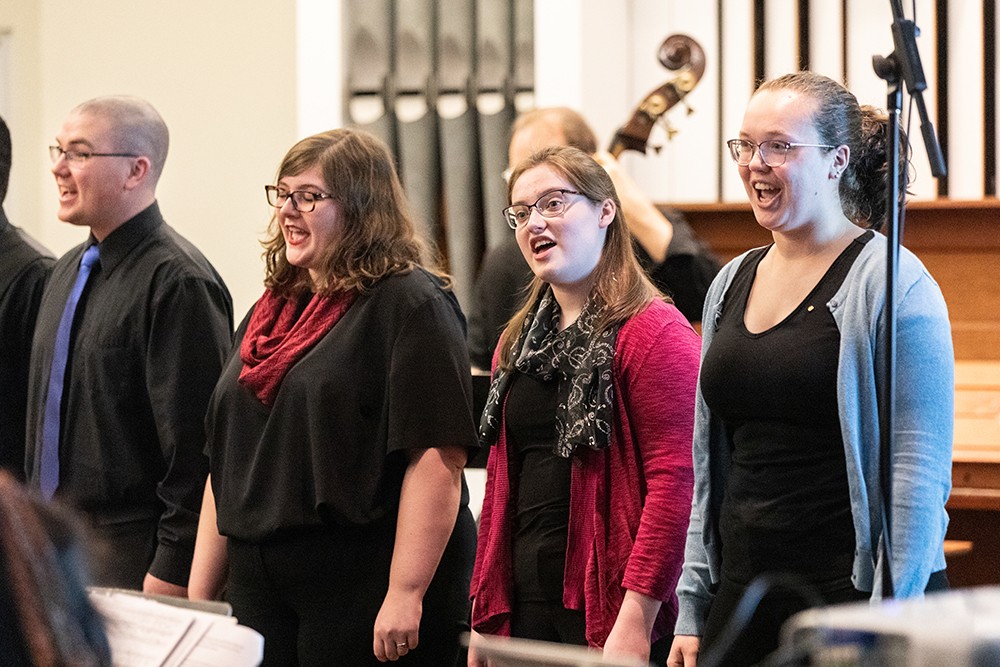 This vocal performance course explores and prepares singers for a diverse and inclusive range of vocal repertory including but not limited to opera, music theatre, jazz, folk, country, contemporary commercial music, and original songs. 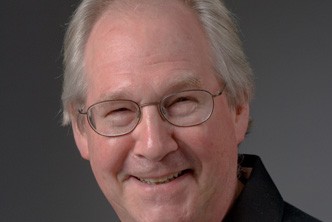 American Bass-Baritone David Ripley earned his Master’s Degree in Vocal Performance at the New England Conservatory as a student of Mark Pearson. Since then he has been widely heard in oratorio, recital, chamber opera, and early and contemporary programs and cabaret as well. Recent performance highlights include a trip in March 2008 with Boston Musical Theater to South Korea, the world premieres of Lori Dobbins’ The Rage of Achilles in Jordan Hall, and Kaddish, by Lawrence Siegel at the Cohen Center for Holocaust Studies. The solo release of Ne Point Passer (To Never Pass Away) on Centaur Records with pianist Arlene Kies, features the melodies of Gabriel Fauré and Henri Duparc and earned fine praise in the American Record Guide. Concerts with BMT featuring the American Song Book have been given in Paris, Brussels, Moscow and St. Petersburg, along with recordings

All That Jazz, live from Rachmaninoff Hall, We’ll Meet Again and Fly Me to the Moon. Mr. Ripley has frequently toured nationally in The Christmas Story with the Waverly Consort, and presented Schubert’s Die Winterreise and Die Schöne Müllerin cycles. As a champion of contemporary music, he was featured in Peter Childs’ one act opera Embers, on the play by Beckett. Richard Dyer, Boston Globe wrote: “Baritone David Ripley… gave an impressive demonstration of vocal skill, musicianship, stamina, memory and imagination.” Mr. Ripley’s recording of Bach Cantata 82, Ich habe Genug with Aston Magna Festival players (Centaur) was recently released with critical praise. His first solo CD, A New Season, with Kies, features works of Ives, Fauré, Schubert and Brahms. Mr. Ripley has regularly appeared at the Aston Magna Festival since 1990 and was for many years a frequent soloist with the New England Bach Festival. Now a full professor, in 2007 he was winner of the “Outstanding Associate Professor Award” at the University of New Hampshire, where he teaches voice and directs the Vocal Arts Program.