registration info will be posted here

2022 guest artists and schedule will be posted here

12pm: Dorothy Braker
Up to your ears: from Kodaly to Beyond
Now that we’re so far into the new century, let’s demystify the last one! Players are often intimidated by advanced repertoire, and as a result they never tackle that “hard piece”.  This workshop will explore ways students can, regardless of level, play difficult cello repertoire. Works explored in the workshop will range from the Kodaly Solo Sonata through pieces composed today, showing some sheet music examples along with practice techniques.

1pm: Jacques Lee wood
Augmented Practice Techniques using BandLab
In this time of covid and zoom, teachers and students are looking at incorporating online technology in the learning process.  In this workshop we’ll look at ways to use the online program Bandlab as a tool to augment some simple metronome and intonation practice techniques.

2:30pm: Carol Ou
From Bach to the Amazon - solo cello music for all ages
In this workshop, we will look briefly at the unaccompanied solo cello repertoire from the Baroque era to the present day and how the pandemic has brought more attention to this body of repertoire.

3:30pm: Andrew Mark
Bow-lympics!
No matter how perfect the left hand is, the bow arm is your musical voice. This workshop will focus on short exercises to increase flexibility, articulation and expand your understanding of various strokes (and their names!) and how to execute them. 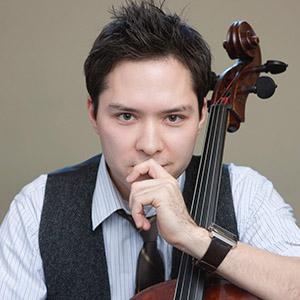 Cellist Jacques Lee Wood has performed around the world as a solo artist, chamber, and orchestral musician. His activities as a performer reflects a varied and broad range of interests.  Historical performance on period instruments, commissioning new works for both modern and baroque cello, improvisation that incorporates live electronics, and composing his own material are just a few of the areas he explores in his creative scope. Dr. Wood is Principal Cello of the Cape Symphony, and is a member of several musical groups including Aston Magna, StringLab, Pedroia Quartet, Triop Klaritas, Antico Moderno, and the NYC-based bluegrass band Cathedral Parkway. He is a frequent guest artist with A Far Cry, House of Time, Yale Schola Cantorum, Trinity Baroque Orchestra, Bachsolisten Seoul, Bach Collegium Japan, Juilliard 415, Firebird Ensemble, and the Handel and Haydn Society.

A recognized pedagogue, Wood holds faculty positions at the University of New Hampshire, Boston Youth Symphony Orchestra, Milton Academy, and Concord Academy.  Because of his diverse musical interests, Dr. Wood is an active guest lecturer and clinician and has presented on a wide-range of topics: from Historical Performance Practice to Music Technology in the Pedagogical Process.

Wood is currently on the faculty of the Norfolk Chamber Music Festival (Yale Summer School), Summer Youth Music School (University of New Hampshire), and is a frequent guest artist at the Great Mountains Festival (South Korea), Korea Strings Research Institute, Bari International Music Festival, Banff Centre, Avaloch Farm, Aston Magna, and the Manchester Summer Chamber Music Festival.  As a recording artist, Wood has released recordings on the Hyperion and Navona labels. Dr. Wood completed his BM at the New England Conservatory of Music under Laurence Lesser, and holds a MM and DMA from Yale University, where he studied with Aldo Parisot. 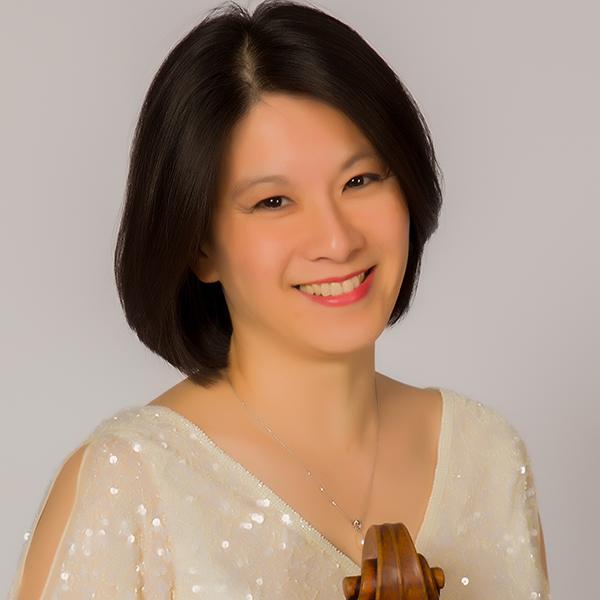 A gold medalist of the Global Music Awards, cellist Carol Ou’s dynamic performances have taken her to prestigious concert halls across five continents, including Carnegie Hall, Jordan Hall, National Gallery of Art, Gardner Museum, National Concert Hall in Kiev, and the National Concert Hall of Taipei. As a soloist and a former member of the Carpe Diem String Quartet, Ms. Ou has long captivated audiences with her “fiery, marvelous” and “meltingly melodic outpourings” (Boston Globe) and her “wonderfully pure cello tone and incisive technique” (The Strad).

At ease with the diverse musical styles of the last five centuries, Ms. Ou’s creative programming is often a mélange of traditional European masterworks with more eclectic ones. She has recorded three of the most beloved cello concerti by Haydn, Tchaikovsky, and Elgar, and premiered several new compositions written for her. She gave the first performance of Hsiao Tyzen's Cello Concerto in Taipei and collaborated with Hsiao on the premiere of a number of solo and chamber music works throughout the US, Taiwan, and Singapore. American composers, Richard Toensing and Daniel Pinkham, have also dedicated works to her. Recent new music performances have featured collaborations with crossover artists on the mandolin, banjo, accordion, didgeridoo, erhu, pipa, and the Persian santoor.

A graduate of Yale University, Ms. Ou received her BA magna cum laude from Yale College and her MM, MMA, and DMA in music performance from the Yale School of Music. A much sought-after teacher, Ms. Ou serves on the artist cello faculty of New York University’s Steinhardt School of Music and teaches both preparatory cello students as well as college chamber music students at New England Conservatory of Music in Boston. Since 2015, as the assistant chair of the string department at the conservatory’s School of Continuing Education, she also cultivates a music-loving adult community. In addition to her regular teaching duties, Ms. Ou travels internationally to teach cello and chamber music master classes, most recently in Hong Kong, Turkey, and Italy. 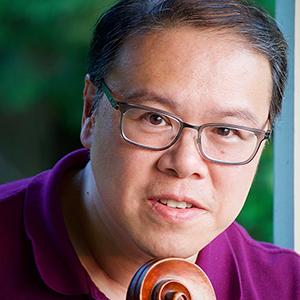 Cellist Andrew Mark received his Bachelor and Master of Music Degrees from the New England Conservatory of Music, graduating with top honors in both performance and academics. His principal teachers have included Bernard Greenhouse, Laurence Lesser, Colin Carr, and George Neikrug. Mark is an active member of Boston's classical music community. He has performed and recorded with such groups as the Boston Symphony Orchestra and the Boston Pops Orchestra since 1989 and has been a guest artist with Boston Chamber Music Society. In 2018 he became the cellist of the Portland String Quartet, recipient of Chamber Music America’s Acclaim Award in recognition of outstanding service and cultural contributions throughout its fifty-year history.

From 1987-1993 he was cellist of the Boston Composers String Quartet, which performed throughout the United States and Europe and was winner of the silver medal at the Osaka International String Quartet Competition in Japan. In 1993 Mark joined the critically acclaimed group, The CORE Ensemble, an international touring trio of cello, piano, and percussion dedicated to the performance of contemporary music. In 2000, the CORE Ensemble received the prestigious MacDermott Award presented by the Massachusetts Institute of Technology for its innovative contributions to the field of chamber music collaboration. An accomplished advocate of new music, Mark has collaborated with some of the world's most distinguished composers including Witold Lutoslawski, Donald Martino, John Harbison, and Leon Kirchner, and has premiered nearly 100 works. His recording of Messaien’s Quartet for the End of Time on Ongaku Records has won critical acclaim. The American Record Guide hailed, “These are no ordinary performers. Each player shines in the extended solo passages. It’s brilliant.”

Mr. Mark continues an ongoing commitment to teaching and is a member of the music faculties of the New England Conservatory Preparatory Division, and The Boston Conservatory where he served as Chair of the String Department from 1995 – 2014. Since 2016, he has been on the cello faculty for the highly acclaimed Program for the Exceptionally Gifted at the Heifetz Institute in Staunton, Virginia. Professor Mark is the recipient of the 2008 Studio Teacher of the Year Award presented by the Massachusetts chapter of the American String Teachers Association and in 2009 was presented an award for outstanding contributions to string teaching by the Foundation for the Advancement of String Education. 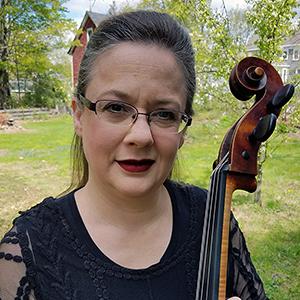 Dorothy Braker, cellist and founder of Aliento Chamber Players, graduated from the Juilliard School with Bachelor's and Master's degrees in music performance. Dorothy had her very first lesson in music at the age of 4 with Dr. Shinichi Suzuki, whose new idea about musical study through unlocking each child's innate potential was first being brought to the United States. Her studies in cello were with Lois Yopp, Phil Blum, Karl Fruh, culminating at Juilliard, earning master's and bachelor's degrees in music performance, studying with Harvey Shapiro.

Primarily a soloist and chamber musician, she has performed extensively across the United States, chiefly with educational performances associated with "Music History a bore? Not a chance!" that went across the Appalachian Valley in local schools, many schools in New York State, and to many fine museums and libraries, including the Newberry Library in Chicago and the Bennington Museum in Vermont. As principal cellist and Outreach Director with The Portsmouth Symphony, she helped to create the Concerto and Aria Competitions, created and directed the youth program MyPSO and the "Get Cozy" chamber series, and was instrumental in creating and maintaining a successful educational concert outreach program for area schools. As the founder and Artistic Director of Aliento Chamber Players, she has been performing with them since 2008. Dorothy is a gifted video editor and music arranger, performs regularly with many area orchestras, chorus groups and chamber groups, and maintains a rich and varied studio for online and in-person chamber music coaching and private cello students.