The College’s Impactful Alumni Award recipient for 2023 is Syl Saller ’79 (double major in psychology and communication).

Saller recently retired as Global Chief Marketing and Innovation Officer of the U.K.-based Diageo, one of the world’s largest beverage companies with several iconic brands. Saller has not only established herself as an outstanding leader in the marketing industry but has also made a tremendous impact on gender equality initiatives in global business.

Saller’s relentless prioritization of gender diversity led to substantial gains in advancing women in Diageo and well beyond. At Diageo, Saller introduced innovative practices to ensure inclusive representation in advertising and provided forward-thinking organizational leadership to help the company reach #1 in Equileap’s 2019 Gender Equality Global Report and Ranking of business corporations. Saller further dedicated herself to making a global impact on women’s lives through initiatives such as Diageo’s “Creative Comeback” program, which supported women re-entering the workplace following career breaks and in collaboration with the UN’s Unstereotype Alliance, created industry-wide guidance on gender representation in marketing.

Saller’s accomplishments were recognized in 2020 by Queen Elizabeth II with a Commander of the Order of the British Empire (CBE) award, one of the highest awards in the British honours system. Saller continues to positively impact the marketing industry through her leadership development practice and her work with the Marketing Academy, which trains Chief Marketing Officers to become CEOs, in conjunction with McKinsey.

Saller will be recognized at the 2023 College of Liberal Arts Commencement ceremony in May. 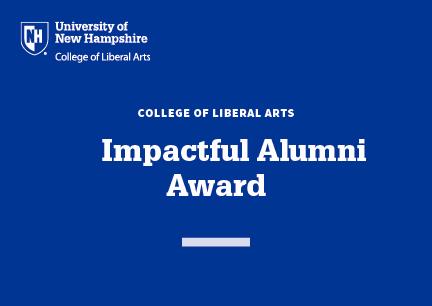 Nominations are accepted by November 15 each year for alumni from undergraduate or graduate programs in UNH’s College of Liberal Arts. Strong candidates from across all sectors and walks of life will have demonstrated excellence in making a significant impact on the lives of others, whether through the advancement of innovative ideas or transformative actions that enrich the human experience.

Nominations may be submitted here:

Winners will be recognized in the spring, annually.

Past Winners of the COLA Impactful Alumni Award

The College’s Impactful Alumni Award recipient for 2022 is Zackaria “Zack” Bazzi. Following a widely distributed call for submissions this past fall, COLA received several nominations of highly accomplished alumni among which Mr. Bazzi’s stood out for the innovative breadth of his activities and the scope of his impact.

Zack, a native of Lebanon, graduated from UNH in 2008 with a B.A. in psychology and subsequently from Georgetown University in 2015 with an M.A. in emergency and disaster management. Before enrolling at UNH, Zack served as a sergeant in the U.S. Army (1997-2001) and also served in the New Hampshire Army National Guard (2002-2008). Zack’s military experience includes deployments in Bosnia, Kosovo, Iraq and Afghanistan, and his work since leaving the military has largely focused on improving the lives of people in conflict areas. He is currently the Regional Director of Middle East and Central Asia for Spirit of America, a U.S. nonprofit working alongside troops and diplomats to improve lives and strengthen American relationships with allies and partners. Over the last seven years, Zack has worked on more than 200 initiatives from Egypt to Tajikistan, including efforts to promote good governance, prevent violent extremism, build social cohesion, educate conflict-affected children, counter misinformation and disinformation, and provide humanitarian aid to displaced populations.

Zack was co-founder and executive director of TentED, an organization committed to advancing education for children displaced by war. Previously, he managed special projects in Afghanistan for an airlift company, oversaw programs in the Mid-Atlantic region for Veterans Green Jobs and was program coordinator for Survivor Corps. Zack has contributed to numerous non-governmental organizations and is currently the president of the board of directors for Empower Lebanon. Before that, he served on the board of directors for the Education for Peace in Iraq Center. Of special note, Zack is a Marshall Memorial Fellow (2017), Daily Points of Light Award recipient (2017), Got Your 6 Storytellers selectee (2016) and a HillVets 100 honoree (2016). He is also one of three soldiers featured in the groundbreaking 2006 documentary "The War Tapes." You can learn more about Zack and this film in a UNH Magazine cover story from 2006. Zack, who loves travel, has visited nearly 60 countries.

Dean Michele Dillon will welcome Zack back to campus in May for COLA's Commencement, at which time the College will formally recognize his accomplishments.

Though the College could only choose one recipient for this award, we are grateful for the opportunity to learn about the lives of some of our outstanding former students through the nomination process. We are inspired by the many ways dedicated and talented College of Liberal Arts alumni continue to impact the world around them.