Welcome to the Beta of New Hampshire chapter of Phi Beta Kappa, founded in 1952. Our members include UNH, UNH Manchester and the UNH School of Law faculty, staff, and administrators as well as students elected during their junior or senior year. Phi Beta Kappa is a national honor society that recognizes outstanding achievement in the liberal arts and sciences and fosters a community dedicated to the pursuit of intellectual inquiry and integrity.

Do you recognize the names of these ΦBK members? Add your name to the list!

Who's now in the ΦBK limelight?

None other than the late Mr. Rogers, who was named an honorary member of The Phi Beta Kappa Society at Carnegie Mellon University in 1995. He's the subject of a new film starring Tom Hanks. Read Who's Back in the Neighborhood in Phi Beta Kappa's newsletter.

Prof. R. Scott Smith of the Department of Classics, Humanities & Italian Studies is the recipient of the 30th Jean C. Brierley Award for Excellence in College Teaching at UNH. The annual Brierley presentation is the signature event celebrating the university’s commitment to excellence in teaching and student learning. Prof. Smith will deliver the presentation on College Teaching: Why (Dusty Old) Languages Matter. Prof. Smith is a PBK member and has served on a number of chapter committees. --February 2021

END_OF_DOCUMENT_TOKEN_TO_BE_REPLACED 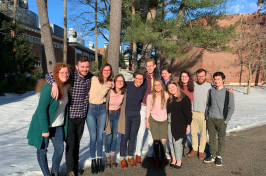 Students research looks at idle time
A course in the science of daydreaming got Lauren Flynn ’20 thinking about the creativity that can bloom when our minds are free to wander. That led to a research position in the affect, cognition and computation lab of assistant professor of psychology Caitlin Mills, who taught the class. Flynn met Catherine McGrath ’20, another lab researcher, and the first seeds of a joint project for the 2020...
END_OF_DOCUMENT_TOKEN_TO_BE_REPLACED
END_OF_DOCUMENT_TOKEN_TO_BE_REPLACED

There are no items to display.