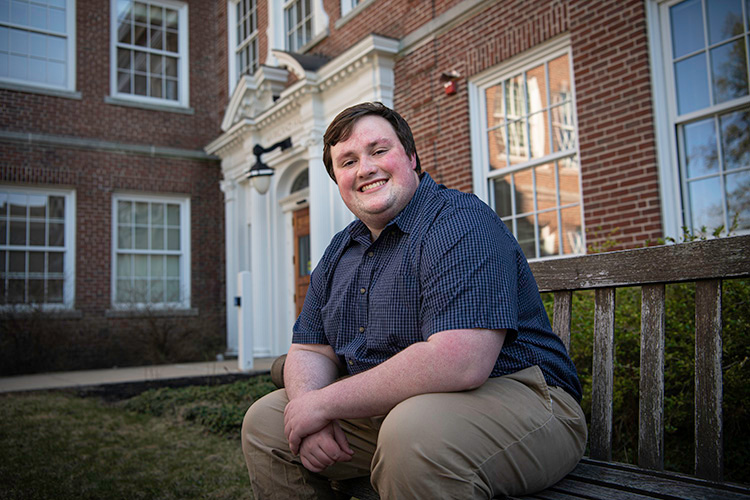 Brendan McWalter has enjoyed music since he was a child in Franklin, Mass.: music was his favorite class in elementary school, and he started playing saxophone when he was in 6th grade. “Music was a stress reliever for me,” he says. During high school, as a counselor at a summer music camp, he helped draw out shy campers with musical improvisations. “Working with those students gave me so much joy that teaching music just made sense,” he says.

UNH was a natural destination for this music education major because “every music teacher I had went to UNH,” McWalter says. In addition to saxophone, he’s explored singing, guitar, piano and a range of woodwind, brass, string and percussion instruments, all during his courses of study at COLA. His favorite music to play is wind literature (music written for concert bands). “All music has emotion and a message, but I find that wind literature is the best way to tell a story to an audience,” he says.

Performances with other collegiate musicians have been a highlight. “I’ve had lots of amazing performance and collaborative opportunities, including high school outreach tours and participating in chamber concerts and competitions,” McWalter says. He gained valuable leadership experience as president of UNH’s chapter of the National Association for Music Education as well as running rehearsals and performing with groups such as the UNH Wind Symphony, Symphonic Band, Wildcat Marching Band, and jazz bands and saxophone quartets. Through a Crew Fellowship, McWalter recorded and live streamed concerts and recitals put on by the UNH Music Department. “It’s given me experience using all different types of recording equipment that will definitely help me when I’m a teacher,” he says. McWalter hopes to secure a music teaching position after graduation and eventually become a band director.

Perhaps the most valuable lesson McWalter has learned at UNH comes from associate professor of music Nathan Jorgensen: to be in the moment. “If you’re thinking about something that happened in the past, you aren’t thinking about what’s happening in the present and the immediate future, which are the most important things to think about when you’re on stage,” McWalter says. “I apply that advice to everything outside of music, as well.”