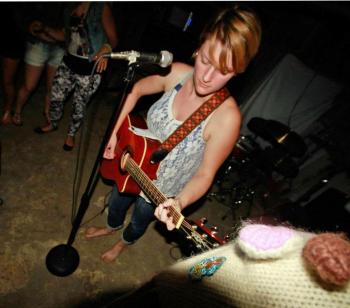 So, you're in eighth grade, and you're into music.  Just you and your acoustic guitar--a guitar you picked up because your older brother plays one in a punk rock band.  You start writing your own songs.  At 14.

You're pretty good--good enough to open for your brother at his gigs at area VFWs, where everything from acoustic to punk to experimental noise rock is performed.  Your friends show up.  Your brother's too.  People clap, and not just because you're Zach Peckham's little sister.

And it keeps going like that for the next four years.  Making high school oh-so-much-more bearable than it might otherwise have been.  Making for a confidence that recently led to the release of a CD--a professionally recorded CD, not one laid down in a friend's garage.  And there you are, an experienced musician at 22.  All because your brother gave you footsteps to follow.

"I idolized Zach.  I wanted to do everything he did," says Hannah Peckham, a 2013 graduate and now part-time worker at UNH's Carsey Institute.  "When he said maybe I could open for him, and it became a regular thing, well, that became such a great part of high school.  I didn't know what to expect but I was so well received by his crowd."

It wasn't long before those gigs at the VFW halls led to playing in coffeehouses in Worcester and elsewhere, opening for artists like Dan Blakeslee, a New England folk singer/songwriter.  Two years ago, Peckham sang a few tracks for the country western album released by the band "Mark Mandeville & Old Constitution."  Zach Peckham played guitar.

"Before the left for a county-wide tour, I sang with them at their CD release at a funky old German bar in Worcester," Peckham says.

During Peckham's first couple of years at UNH, however, she set music aside to concentrate on her studies.  Then love exited her life, and she found herself at a crossroads, trying to decide what would come next.  So, she started to write songs again.

"I'd sort of lost the fire.  Then, all of a sudden, the songs just would not stop," Peckham says.  "Before I knew it, I had written seven new ones.  I guess I was inspired in some ways by losing love, by what that means.  There's definitely some longing in my music."

Last fall, she rolled all that up into her new CD, "Good-bye Blue Moon," released in May.  It was recorded by Jacob Gaulin, Zach Peckham's band mate.  Younger brother Sam Peckham, a student at Massachusetts College of Art and Design, shot the cover photo.

The Barre, Mass. native had two other CDs that she previously recorded with friends using a laptop.

"I made every single package for the first one," Peckham says.  "I was 16, 17 years old.  It was a long time in the making.  The weirdest part of going from handmade to the recording studio is the sound.  I heard it and thought, 'Wow that has a professional quality.'"

Right now, she doesn't know where her music will next take her.  A geography major with a sociology minor, Peckham says she had never really considered music as a career.

"I have always wanted to find a job where I could say, 'Wow, this is me,'" she says.  "But 'making it' was never my goal with music.  I don't have any goals about making money, about payoffs.  The payoff is people being there, and me playing, and hearing them say, 'Oh, I love that song.'"