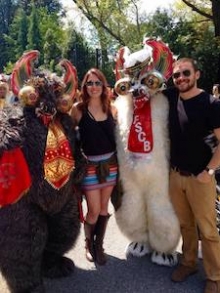 Please tell us about yourself (can be brief) and where you are now today.

My name is Adam Severance, I am from New Hampshire and currently live and work in Cambridge, MA where I am an Account Executive at marketing and PR firm LaunchSquad. I graduated from UNH in December of 2015, and during that time studied Arabic under Ruwa Pokorny and Islam Karkour for two years (a semester of which I was a TA for Arabic 401). I also spent a semester interning at the Diplomatic Delegation of Palestine through the Washington Center. Before UNH I spent time at the New England Culinary Institute, NHTI, and AmeriCorps NCCC.

Did you have another major and/or minor at UNH? What impact did studying a language have on your other field/discipline?

I was a Political Science major while at UNH. Although I had nearly all the credits for the Middle East Studies minor, I didn't end up finishing as my time in Washington DC supplanted those credits. Arabic was huge for my other studies (as well as my career today) as it taught me how to learn in a completely different way. Learning a language drastically alters your personal pedagogy because you are forced to break down fundamental habits and ways of doing things— like speaking— and start new again. You have to take that well-understood practice and dissect / rebuild it into something different. It's a detail-oriented process that, from a procedural standpoint, can improve the way you remember facts, processes and systems, regardless of subject.

Language instructor/professor who made the biggest impact and why?

Ruwa Pokorny was massively impactful. Beyond her abilities as a teacher, she just approached the role of mentor with a level of empathy and skill that was unparalleled in my UNH experience. College professors work with thousands, sometimes millions, of students throughout their career, and the ability to make each one feel appreciated and cared for is exceedingly rare. Ruwa was especially skilled in doing that and it defined her classroom.

Unfortunately I wasn't able to study outside the country while at UNH. I did spend a semester in Washington DC through The Washington Center. It was a life, and career, changing experience. If I hadn't gone to The Washington Center, and gotten the internship at the Delegation (which I got because of my Arabic studies), I never would have had the work experience to get a position right after graduation. Probably the best memory was attending a senate subcommittee hearing on Palestine's bid to join the International Criminal Court. The entire audience was removed due to protesters, but they made an exception for us as we were part of the delegation.

Why language was important to your UNH education? How has your language major or minor benefitted you?

Going back to my response on how language studies impacted my other studies, learning a language changes the way you perceive the world around you. It's also something that you can point to while speaking with potential employers that says to them that you are flexible and able to learn new ways of doing things. I work in tech, so things change very quickly. I have been told time and time again that the most important trait in an employee is their ability to learn on the fly and be open to changing landscapes and ways of doing things. Languages imbed that ability at a very fundamental level. It's also wicked cool to randomly start talking a different language in front of people, so there's that.

If you could talk to a prospective student, what would you tell them about the value of majoring in a language at UNH?

Everything I wrote in regards to how language influences other classes + your career. But also, do it for the sake of pushing yourself and setting yourself up to communicate with people from other cultures and countries.

I currently work at a communications agency, working with tech brands across a variety of industries, and I do enjoy that work, but I really want to shift more into brand strategy work, specifically in agriculture and food systems. My background is in food and there is super exciting work happening in agriculture around the world, specifically here in the US. The one commonality among every brand is that they need to tell their story well, and the reason I got into communications and marketing is because I knew I could move around to different industries as I wanted. So I could very well cross over to a few different spaces.