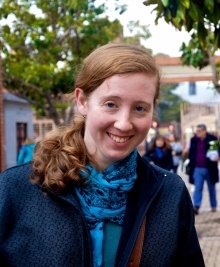 About Audrey and where she is today

I graduated from UNH in 2013 and majored in Spanish and political science. I came back a year later to start my Master's degree in Spanish, which I am currently finishing. During my year off I taught high school Spanish and spent 3 months at an internship in Santiago, Chile. I also studied abroad in Granada with UNH's program as an undergraduate. I am currently writing my Master's thesis on how Chilean documentaries of the post-dictatorship respond to the challenges of representing traumatic narratives, and generally I am interested in memory and trauma studies in film and literature. In the fall of 2017 I will start a Ph.D. program in Hispanic Literatures & Cultures at the University of Michigan in Ann Arbor.

What impact did studying a language have on your other field/discipline?

I started out undeclared, became a political science major, and was working on a Spanish minor until my time studying abroad in Granada convinced me to declare Spanish as my double major senior year. Spanish and political science mix my interests in culture, history, theory, politics, and human rights. I did my undergraduate honors thesis in political science, but I chose a topic that I had learned about in my Spanish classes. And although I continued to study Spanish, I still use my background in political science frequently, even when analyzing film and literature.

I can think of a few professors who have made a considerable impact on the way I think and the choices I've made. I have worked on a lot of projects with Professor Scott Weintraub, and he is also my thesis advisor. He taught the class that introduced me to a lot of the history and ideas I work with today. We have overlapping interests and compatible working styles, and he is always willing to help if I have a question, need advice, or want to talk about something. Professor Weintraub has both challenged and encouraged me in a way that's been very effective, and his support has been invaluable.

Tough to choose! I went on a research trip to Santiago, Chile in 2015 to go to a documentary film festival and I was able to attend the national premiere of a documentary by Chile's well-known director Patricio Guzmán. I had started watching and studying Guzmán's films about four years prior and was planning to include at least one of them in my Master's thesis project. The premiere was in a small theater located in a cultural center under the presidential palace and I think I was second or third in line. We when we sat down my friend said, "Well, since it's the national premiere, I expect Guzmán himself will present the film," which was something I had not considered. Sure enough, this director I'd been studying for years strolled in, presented the movie, and answered questions afterward. It would take more space to explain why this (surreal) night, and that whole trip, were so rewarding on multiple levels, but suffice it to say that since Chilean film isn't so common in New Hampshire, it was incredible to suddenly be thrust into the center of something I'd been studying from the outside in.

Why language was important to your UNH education? How has your language major benefitted you?

In practical terms, studying Spanish led me to a career path, which was no small feat. I never really had a clear idea of what I wanted to do, even as a graduating senior, but my experiences at UNH, while teaching, and while abroad helped me figure out how much I enjoy the challenges of learning/researching and teaching. In more abstract terms, language study broadened my perception of the world immensely. I always stress to my students that learning a language is a window into another culture, a chance to learn something about an experience different from your own, but also an opportunity to see that our differences are not so great. The importance of this kind of tolerance and open-mindedness cannot be overstated in today's world.

My experience studying abroad in Granada, Spain was one of the main reasons I decided to declare a Spanish major my senior year. Seeing a language I had basically only used in school get put to use in the real world was pivotal. I had a very kind host family who were eager to teach me about Spanish culture. I still keep in touch with them, and I visited them last summer. I was pushed out of my comfort zone and I learned so much. Plus, it was just plain fun to have the chance to live in another country for a few months and travel. I doubt very much that my life today would be the same if I hadn't studied abroad, and I highly recommend it to ALL majors.

If you could talk to a prospective student...what would you tell them?

In a practical sense, pairing a language with whatever career plans you have simply makes you a more marketable candidate. Even if a foreign language seems irrelevant to your chosen line of work, learning a foreign language challenges and trains your brain, improving problem solving and critical thinking. Regarding the Department of Languages, Literatures, and Cultures specifically, UNH has an accomplished and engaging group of faculty, including experts in second language acquisition, as well as experts in a variety of academic fields—so once you've learned the language, you will also be taught to use it to dive deeper into culture and/or linguistics. In my experience, the department has been very supportive. If you are honestly committed to doing something (even if what you are committed to is figuring out what you want to do), you will find someone who is willing to help you achieve it. Lastly, UNH runs well-organized, established study abroad programs in multiple countries that make orchestrating your study abroad and transferring credits way easier.

Finishing my Master's thesis is on top of the list! After that I am gearing up to start the Spanish Ph.D. program at the University of Michigan, which I am very excited about. I am open-minded about what my career will hold, but the goal is to become a Spanish professor at the college level. Ultimately, I want to be able to continue to discuss and learn, read, and write about Hispanic literature, film, and culture—and hopefully get a little traveling in.