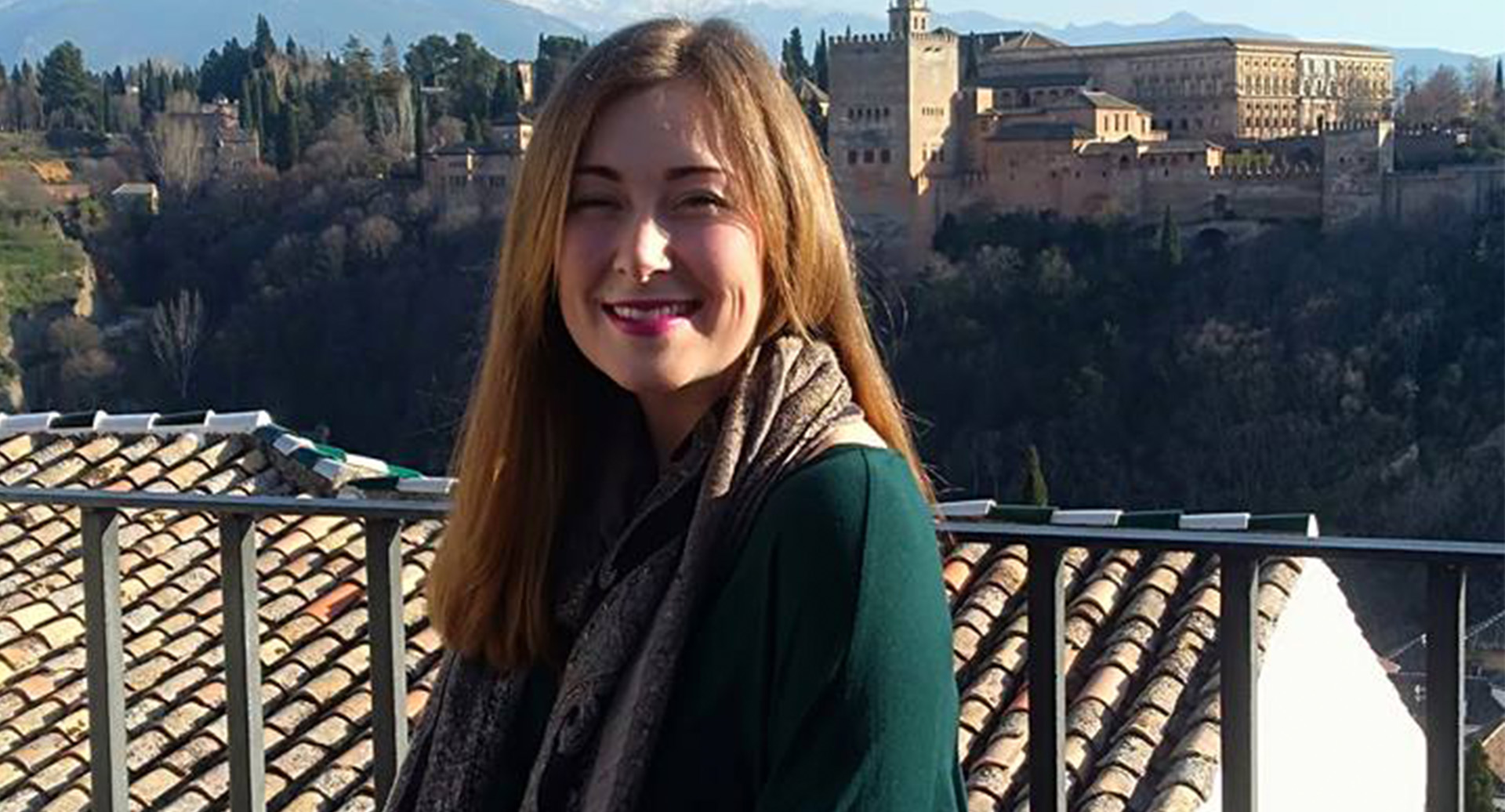 In 2008, I graduated from Pinkerton Academy with very little interest in continuing on to college. I wanted to be a hairstylist. I completed my cosmetology course and was a hairstylist for three years until I decided that I wanted to do something more because, for me, something was missing from my life. I knew I wanted to teach. I think about it now and if I had the opportunity to talk to that same girl in 2008, and tell her that 10 years later I would be living in Spain with two master's degrees, I know that I wouldn't even believe myself!

I first arrived to UNH as a transfer student from Manchester Community College and I knew that I wanted to study Spanish. I had planned out my studies pretty well over the two years that I was studying at MCC, so I knew that those studies would also include study abroad and I had no doubt in my mind that I wanted to go to Spain. Towards the end of my time at UNH, I decided to declare a minor in Women's Studies and it was great because I was able to take some WS classes in Spanish and link my two interests of study together. This really allowed me to develop my vocabulary to be able to talk about more diverse topics that, for me, are extremely important.

While I was at UNH, I felt supported by the entire department. It's a rather small department and I really wanted to be involved, so I got to know even some professors that I didn't actually have class with. Lina Lee, Margarita Muñoz Piña, and Derek Hubbard are a few of the professors that I didn't actually have class with; however, between the department activities and "la hora del café" I was able to get to know them and learn from them as well outside of the classroom. As for the professors that I did have the pleasure of having class with, I have to say that every single one of them was amazing. One of the first Spanish classes that I took was with Jorge Abril Sánchez and his class really prepared me for what I would later experience in Spain. I learned about Spanish history and culture and when I arrived in Spain I really felt informed and prepared to be in a new country. I think that because of that class, I didn't experience very much culture shock at all, I really felt like I knew what to expect. During my study abroad in Spain, I was in Granada with Linda Thomsen where we went on numerous trips and learned all about Spain and what it was like to live in a foreign country and with host families. She was so supportive and always encouraged us to immerse ourselves in the culture, speak Spanish, and really take advantage of our time there to learn as much as we possibly could. I was actually able to meet up with Linda a few times while she was in Granada this past spring and catch up, which was really nice. When I returned to New Hampshire, in my last year at UNH, I took classes with John Chaston, Holly Cashman, Daniel Chavez, and Carmen Rasilla. John Chaston taught my Phonetics and Linguistics classes and, in both classes, I learned so much and in such an interactive and fun way. He really encouraged us to participate and, especially in a class as important as Phonetics, we were able to improve our pronunciation. For some people, Linguistics might not be the most interesting subject; however, John Chaston made the class interesting for everyone. Everything we did was practical and we were able to apply everything that we had learned up until that point to the class and really understand la gramática española on another level. With Holly Cashman, I was able to combine my two interests of studies, Women's Studies and Spanish, and I loved the fact that I was able to do that. I also took a sociolinguistics class with Holly and it really inspired me to continue studying related topics that, ultimately, I was able to relate to both of my masters' theses, one being a didactic unit specialized for Spanish heritage speakers in the US and the other, a study about the linguistic attitudes and beliefs of ELE (español como lengua extranjera) students from the United States. I took a Literature class with Daniel Chavez and I really learned a lot about poetry more than anything. I've never enjoyed poetry because it's always been hard for me to understand, and even more in another language. However, in his class, I was able enjoy what I was reading because I learned to interpret the messages of each poem. I also read what continues to be one of my favorite Spanish novels, Crónica de una muerte anunciada by Gabriel García Márquez. Lastly, I'd like to mention my professor and advisor, Carmen Rasilla, who has encouraged me and supported me throughout my journey at UNH and has continued to do so even after graduation. Carmen was the first professor that I met at UNH and helped me plan my studies so that I would be able to achieve all that I wanted to, especially my study abroad to Spain. I was able to take her class on Don Quijote and completed my capstone project. One of the best experiences at UNH was when I did an independent study with Carmen on Dalí. We were able to design the study so that I could combine, once again, Women's Studies with Spanish. I did my final project on the ways that Gala is represented in Dali's art. Towards the end of my studies at UNH, I knew that I wanted to go back to Spain and Carmen helped me and advised me through that process as well. She's also encouraged me to one day get my PhD, which I continue to think about as a possibility.

It's very difficult to choose just ONE memory from my time abroad. I would have to say first and foremost, the people that I met. While I was in Granada, I stayed with an amazing family that continues to be a part of my life, Luis and Fernanda. For me, they are like family and while I was with them I was able to experience an authentic cultural experience and I learned so much! I still see them just about once or twice a month and we get together for "meriendas" and catch up. I also met my boyfriend while I was studying abroad and well, I certainly can't leave him out! He taught me so much about Spain while I was there and has also supported me unconditionally, because moving to another country is not always so easy, but it's definitely possible! I'd also like to mention the experiences that I had inside the classroom. It was a great experience to be able to, what I like to call now, get a sneak peak at what learning is like in Spain. Usually when students go to Granada to study, like me, they study in the Centro de Lenguas Modernas, which is definitely similar to the way that the Univerisdad de Granada works; however, it's completely geared towards language learning, so it is a little different. Now that I have done both, studied at the UGR and the CLM, I can compare the two experiences and they were both fantastic. I've learned so much and my studies at UNH have definitely prepared me for everything that came after.

How the language benefitted Elizabeth?

I knew that I wanted to major in Spanish when I got to UNH because, after working as a hairstylist for 3 years, I knew that something was missing. I knew that I wanted to do something more. So, I decided that I wanted to teach—but what? Well, I thought about it and I had always liked Spanish class, and my best friend, Monica, and her family had always encouraged me to learn the language. Monica's family is from La República Dominicana and Colombia, so I had plenty of opportunities to practice with them! Aside from my interest in the language, I couldn't think of anything better to teach than language, which I look at as the gift of communication. Imagine, if everyone in the world spoke at least two languages, the possibilities of how many more people could communicate with one another would be tremendous. Language learning is essential, in my opinion, and I think that everyone should try to at least minor in another language while they have the opportunity.

As I mentioned previously, my time abroad and my independent research with Carmen Rasilla were two aspects of my studies at UNH that really impacted me in such a positive way and helped create the path that lead me to where I am today.

Not to repeat too much of what I said before, but I just really feel that language learning is incredibly important in today's society. If you can minor in a language, I think that's great, but majoring in a language will provide you with so much more practice and opportunities to dominate that language and be able to use it effectively in whatever you choose later in life; in your profession, travels, personal life, etc. I recently went to my best friend's wedding in Greece and it was AMAZING to see that out of the 500 people that where there, at least half spoke two or more languages. Everything was done in English, Greek and Spanish, and it was really beautiful to see how language can bring so many different cultures together.

I am currently living in Spain and I plan to stay here. Just this past June I completed a dual master's program in Secondary Education and Superior Spanish Studies and I am contemplating doing another program to complement those degrees in English this year. Last year I began working as a language assistant (auxiliar de conversación) in a small town outside of Granada (Monachil) and it was a really great experience. This year I am going to continue working in the same high school and, hopefully, the following year I'll be able to find a job in a private school here. Meanwhile, I'm getting really great experience being in the classroom with teachers and we can all learn from each other. Initially, when I started studying at UNH, I thought that I wanted to be a Spanish teacher, which is still a possibility. However, since I'm living in Spain, it'll probably be much easier to work as an English teacher given that it's my native language, and that's why I'm thinking about completing the English part of the master's program. Either way I'll be happy because I'm still teaching language and I get to use both Spanish and English.