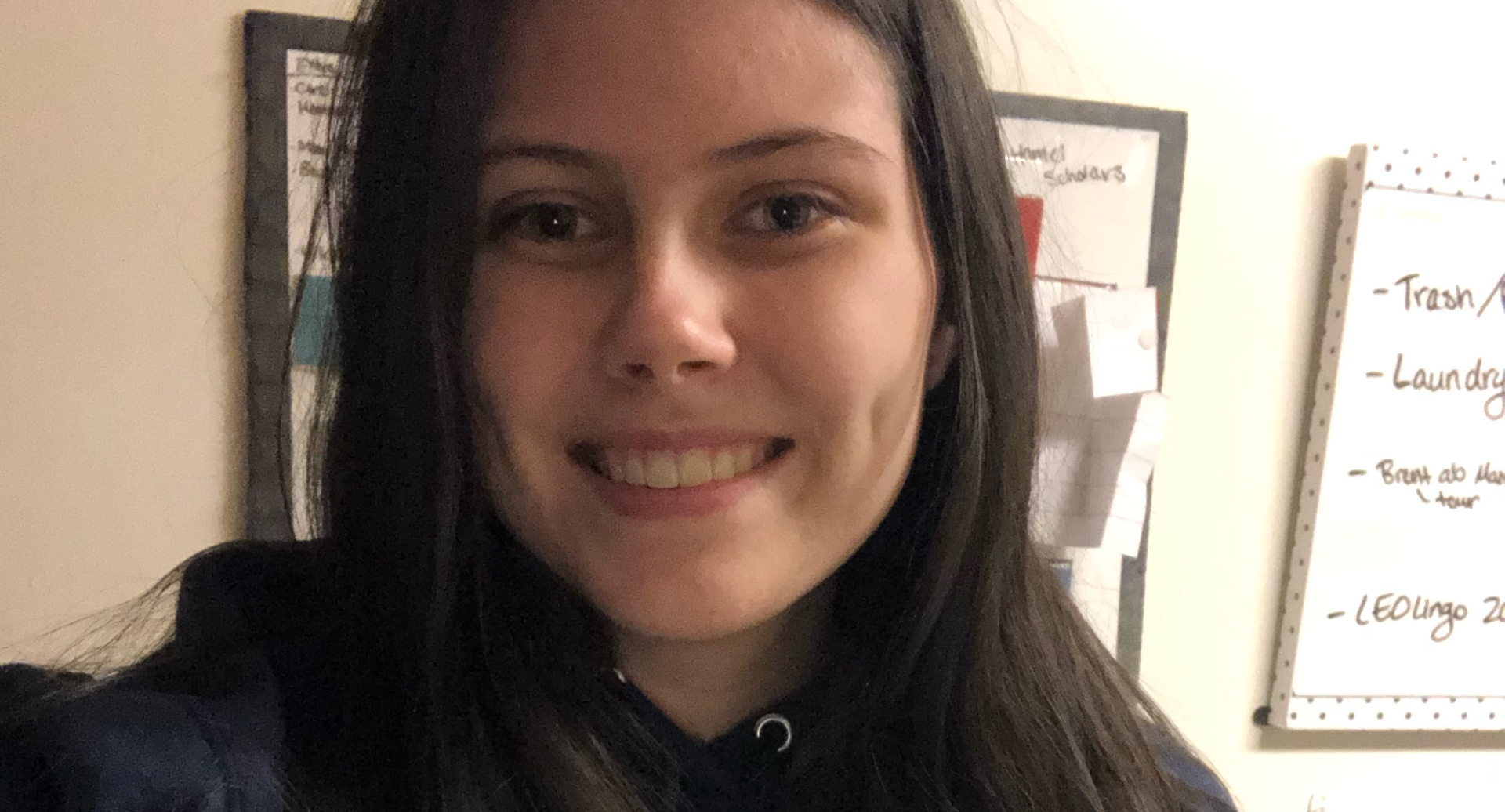 What made you choose UNH?

To be completely honest, I chose UNH because it was my only option. As a chronic over-achiever, I had applied to all Ivy Leagues and musical theatre conservatories, and UNH was the only place I was accepted. Once I was here, though, I knew I wanted to stay. I'm the fourth female generation of my family to come here; my great-grandmother got her master's degree here. Being a part of that history is incredibly empowering. Also, I quickly came to realize that UNH was not just a gorgeous campus. I'm the sort of person who wants to learn as much as I can and take advantage of every opportunity that comes my way. UNH is a fantastic place for that kind of mindset. There are so many opportunities here, regardless of your major. From research funding (in state, national, international) to study abroad to Social Venture competitions-- you think of something you want to do and UNH probably has a way for you to get there.

How did you choose your major and why?

My journey to the degrees I will be graduating with has been long and convoluted in the best possible way. I initially came to UNH as a musical theatre (MT) major, with a dream of performing on Broadway someday. I knew I wanted to double major and thought about adding political science. After a year, I realized that wasn't what I needed, dropped MT, and switched to English/journalism. I love people and journalism guaranteed I would talk to plenty of interesting people nearly every day of my career. I eventually combined two of my biggest passions – art and activism – into a self-designed major called "Artistic Activism." This was approved and was officially my second major for about a semester. Then, the spring of 2020, I studied abroad in London at a very international university (for two months before being sent home for the pandemic). Being surrounded with so many people from around the world was incredible and influenced me to drop my self-designed major and replace it with International Affairs. Although my journey to Journalism and International Affairs was a bit chaotic, I don't regret a second of it. I'm even glad I went through the self-designed major process, because it made me really figure out and articulate what I want to learn and what I want to get out of my UNH education.

What do you enjoy most about being in the College of Liberal Arts?

The best part of COLA is the wide breadth of education you receive. A liberal arts degree doesn't just prepare you for your own particular career; requirements like the 2 semesters of a language prepare you to interact with the greater world in a way intense major specialization cannot. Also, liberal arts classes tend to have fantastic discussion! I can't speak for students in other colleges but from my experience many COLA classes are discussion-focused. I've absolutely loved this and personally I feel it prepares me for life outside of college much better than any lecture-style classes have, given my majors.

My favorite experiential learning I have undertaken at UNH was studying abroad in London. I was only there for two months before being sent home for the pandemic, but I loved every second. My host university – Regent's University London – is almost entirely international. I think I met maybe two British students the entire semester; everyone else was from around the world. As a kid, I remember making up a public-school system where there was a magic bus that flew you to a different country for each class, so it was a childhood dream come true. While there, I made a video project interviewing 30 students from 17 different countries about what they were taught in elementary school about the same five major historical events. Listening to the differences, sometimes subtle, sometimes outright contradictory, was definitely a highlight of my academic experience. Also, having never been able to afford to travel internationally, it was my first time outside of the U.S., which was every bit as incredible as I had hoped it would be. For other experiential learning, this summer I'll be interning at a local New Hampshire newspaper as a reporting intern, and I plan to apply for a Fulbright next Fall.

Are you involved in any groups, clubs or organizations?

I feel like I've joined at least one new club or org every semester I've been here! Freshman year I was involved in Fight4HER, Wildtones acapella, Main Street Magazine, WildActs Social Justice Theatre Troupe and Stop the Stigma. Sophomore year I joined Circle K (community service, not the gas station). I've continued with WildActs and Main Street Magazine through junior year, and joined Student Honors Council, Model UN, and am occasionally a contributing writer to The New Hampshire. Junior year I was also accepted as a Hamel Scholar and was hired as an RA in Hubbard Hall. I was just rehired as an RA in Congreve for next year, and in addition to continuing with my involvements from this year hopefully my schedule allows me to join the Sailing club, which I've always wanted to do.

How is COLA preparing you for career and professional success?

COLA's honors classes have been highlights of my UNH education and I think they have had a huge impact on me intellectually. The discussion-based courses that encourage us to debate and question what we are being taught have been incredible. They have helped me feel very prepared professionally for my career as both my majors have conversation and questioning as overarching themes. Also, I've had a fantastic advisor (shout out to Tom Haines).

What are your post-graduation plans at this point?

Right now, my post-graduation plans involve travel. I would eventually love to go to grad school to get a Ph.D. in social anthropology, but after my study abroad was cut short and the pandemic hit, I am craving adventure and some time to just live life to the fullest. Even though it'll be fun, I'll still write while I'm abroad and it will also be useful experience following my international affairs major. I'm planning on applying to an international grant, and my backup plans are to teach English abroad or go WWOOFing. A dream would also be to get a journalism job somewhere in Europe, possibly at an English-written expat newspaper.

What is one thing people might be surprised to learn about you?