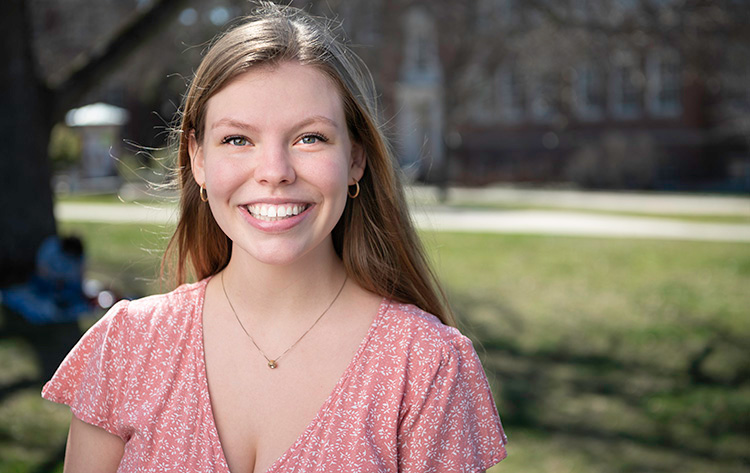 Although she entered UNH undeclared, Makenna Comeau trusted that COLA had many options for someone with diverse interests in anthropology, psychology and the humanities.  “It was important for me to test the waters before settling into a major because I wanted to make the very best decision for my future,” she says. “I most appreciated my Introduction to Media Studies class with Joseph Terry. I was fascinated with mass media and broadcasting in high school but didn’t realize there was a major that fit my passions so perfectly.”

One reason the communication major came to UNH was its proximity to her hometown of Merrimac, Mass. But lessons about independence came early, when she lived in a triple dorm room freshman year. “It taught me so much about becoming independent and adapting to change,” she says. “We would fight over silly things like Domino’s Pizza vs. Durham House of Pizza or who took out the trash, but, because I embraced the roommate situation, they ended up becoming my best friends.”

She’s embraced other new opportunities, too, from attending dorm socials freshman year to participating in a range of co-ed intramural sports including soccer, floor hockey and broomball. “It sounds like a cliché but this strategy allowed me to find my own community that’s stayed with me,” Comeau says.

Experiential learning is another area where Comeau found success. During her sophomore year, she interned at New Hampshire Public Broadcasting. From developing copy for social media, press releases and on-air promotions to learning basic video editing techniques, she engaged in an exciting multi-media landscape. Although her study abroad experience in Florence, Italy, was cut short by the pandemic, she remembers it as “the experience of a lifetime. My time abroad pushed me completely out of my comfort zone,” she says. “It was the best decision I could have made.”

Comeau has found a path, despite initially being unsure of her major. She plans to pursue a career in marketing and public relations. “The authenticity of COLA’s staff and faculty, along with the appreciation they have for students, sets COLA apart,” she says. “They want you to succeed.”