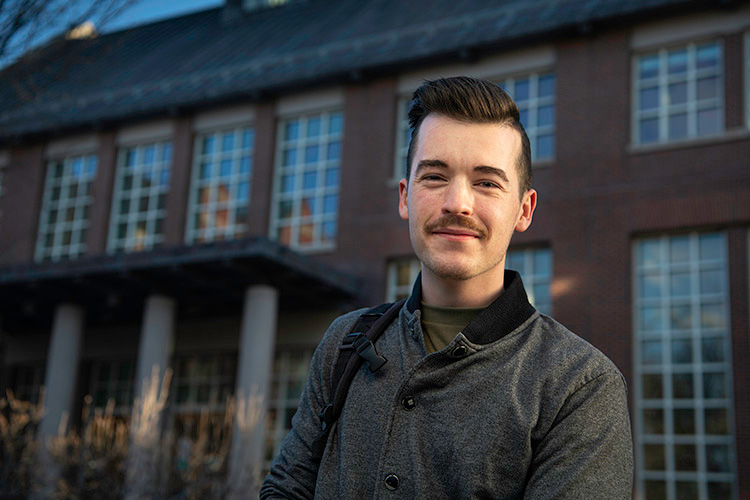 When he stepped onto campus as a freshman, Peter Murray knew he wanted to study history. By the time he was a senior, he had added photography and a new appreciation for the visual arts to his varied interests, which include competitive powerlifting and working for the New Hampshire Air National Guard.

Murray, who hails from Rochester, N.H., was intrigued by UNH’s study abroad programs. “One of the reasons I chose UNH was its convenience, but I also wanted to study abroad and knew their resources were varied,” he says. Studying at Regents University in London was transformative. “I studied British museums and wrote a short book, ‘The Art of Outcasts,’ about artists fleeing persecution in World War II,” he says. “Study abroad allowed me to experience a new way of life and education and I became a better researcher and storyteller.”

Studying abroad also enabled Murray to explore his passion for photography. “When I was abroad, I set a goal to take 100 pictures a day, edit ten, then post one (on social media),” he says. An especially meaningful project was a three-section photography series examining internal strife and past regret, entitled Ceasefire, Wasteland and Eternal Night. “I learned what I like and don’t like and how to quickly convey a story through a picture,” he says. He was later able to conduct independent research by working in UNH’s photography lab.

As a history major, Murray specialized in British history; his junior year, he won the Marston Scholarship for his research about the 1918 Korean Declaration of Independence and presented at the Undergraduate Research Conference.

After taking a museum studies course with history lecturer Kimberly Alexander, Murray interned at the Portsmouth Athenaeum and the American Independence Museum in Exeter, NH. Both internships enabled him to explore research methods, exhibition curation and communications. Now, Murray is considering a variety of career options after graduation: working with the Air National Guard; developing online history courses for museums; or delving further into his photography work. Lessons learned from his powerlifting experience also reflect his time at UNH. “The greatest parallel I can think of is my belief in delayed gratification and being willing to endure temporary discomfort while working towards a long-term benefit,” he says.