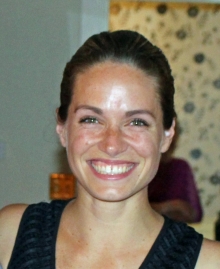 About Tess and where she is today

I am a 2014 graduate of UNH, majoring in Spanish with a minor in Latin American Studies. I stayed at UNH to do a Masters in Spanish, which I just completed this past December (2016). While an undergraduate student at UNH, I had the opportunity to study abroad in Cuzco, Peru, which launched my interest in the Andes, globalization, and indigenous languages and cultures. My coursework in the department also inspired me to investigate themes of trauma, memory, and performance. My undergraduate honors thesis focused on the social and political impacts felt by Peruvian migrants to urban centers who decide to maintain their Quechua language use. As a graduate student in the department, I wrote my Masters project on indigenous rappers from Peru, their performance of identity and race, and the inevitable transnational dialogues developed between their hip hop practices and those of African Americans from the United States. As a graduate student, I also investigated the use of YouTube by the children of survivors of Peru's armed internal conflict to express the traumatic memory of their parents, as well as questions of race and elite language use in a Peruvian sitcom. I am currently living and working in Quito, Ecuador on a Princeton in Latin America Fellowship. Here in Quito I work with CENIT, a foundation in the impoverished south of the city, which works to progressively eradicate child labor by offering dynamic educational opportunities to disadvantaged and vulnerable youth. Next year, I plan to start a PhD program in Hispanic Studies at Brown University.

What impact did studying a language have on your other field/discipline?

While at UNH, I minored in Latin American Studies. Studying Spanish allowed me greater access to the materials that I studied, as well as to read important texts in their original language. I also participated in various service trips in Latin America while at UNH, and having a knowledge of Spanish afforded me the opportunity to really get to know the populations with which I was working.

Although I worked closely with a variety of professors while at UNH, Professor Lori Hopkins has had the largest impact on my academic career and future goals. I originally came to UNH planning to major in English with a focus on American literature, but decided to switch gears after taking Spanish 631 with Professor Lori Hopkins. In Lori's class I became passionate about Latin American film, literature, and culture, and so decided to concentrate in Spanish and Latin American Studies. Over the years I have taken some nine courses with Lori, and continue to be inspired by her energy, intellect, and scholarly work. Lori's classes are always fascinating, and have introduced me to a variety of topics and theoretical approaches that have really come to shape my own interests and work. Beyond being an incredibly inspiring professor and academic, Lori's advising and mentorship has prepared me for life beyond UNH, and her constant encouragement has motivated me to pursue opportunities that I had previously thought to be unattainable.

In the spring of 2013 I spent the semester in Cuzco, Peru with SIT's Indigenous Peoples and Globalization program. I remember very fondly this experience as it launched my passion for the Andes and the study of indigenous cultures and literatures, but my favorite memory would have to be the final month of my stay when I had the opportunity to do independent research. I chose to study the impact of Peruvian reality television programing on the identity formation of indigenous Cuzqeño youth. My research took my all over the city, where I was able to meet a variety of young people, all of whom were extremely passionate about the place of their Quechua language and culture in Cuzco's urban center. I met university students who had launched their own indigenous student union, young teachers at a bilingual-multicultural school, an indigenous dance cooperative that practiced/performed in city plazas, and the young hosts of a local bilingual radio show. I will never forget some of my conversations with these individuals, and the way that they so passionately worked to maintain their own visibility and space within Cuzqueñan culture.

Why was language was important to your UNH education? How has your language major benefitted you?

My language education afforded me the opportunity to study and experience cultures, literatures, and cinema that I otherwise would not have been able to access. It has also allowed me to communicate with the Spanish-speaking world and even work in South America. That being said, majoring in Spanish does not just involve learning Spanish but rather coming to understand Hispanic culture production and its corresponding theoretical and ideological contexts. My Spanish major at UNH has benefited me by means of preparing me for further study of Latin American literatures, cinemas, and cultures, as well as by giving me the practical language skills necessary to live and work abroad.

I would say that my undergraduate Honor's Thesis, which I also presented at the URC, was one of the most important experiences I had while an undergraduate student in the department. Having the opportunity to do more advanced, in-depth research inspired me to pursue graduate studies and conduct further research in the field of Andean and indigenous cultural production. I truly enjoyed being able to cultivate the interests that I had developed through my coursework and while abroad, as well as working closely with my advisor, Dr. Lori Hopkins. Although the work was quite rigorous, I truly enjoyed every minute of the research and writing process.

Next year I plan to start a PhD program in Hispanic Studies at Brown University. I hope to continue my research of indigenous and Andean culture production, with a particular focus on the use of non-traditional literatures and performances to create "alternative" discourses and histories. I also would like to learn at least one indigenous language, preferably Quechua. After finishing my graduate studies, I hope to become a college professor in the field of Spanish and Latin American Studies.