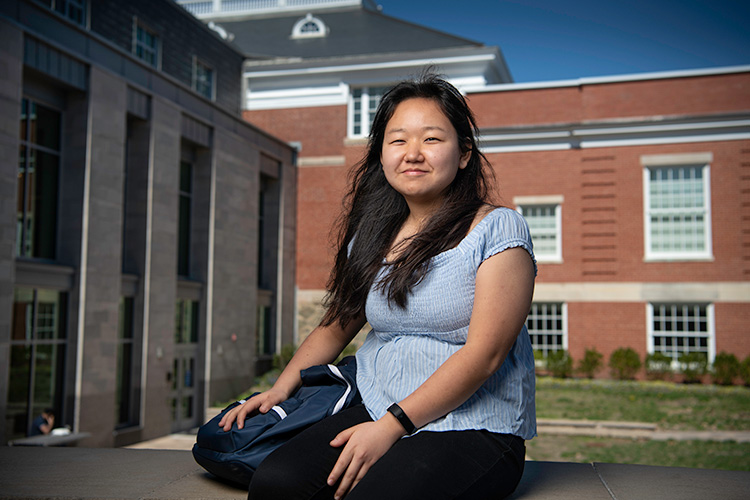 When she first arrived at UNH, Abrita Kuthumi thought she would study medicine. But, after studying abroad and a Washington, D.C., internship, she switched her major to political science and international affairs with a minor in English. It dovetails well with her desire to help others.

Kuthumi, who moved to New Hampshire from Nepal as a child, lived in the Fairchild international dorm freshman year. “I became friends with a lot of the South Korean residents and that led me to study Korean,” she says. She traveled to Korea twice on Critical Language Scholarships, teaching children in Gwangju about Nepal and the U.S., taking Korean language classes and staying at Beomeosa Temple in Busan. Languages are among Kuthumi’s strengths — she speaks fluent English and Nepali and has some knowledge of Hindi and Korean.

Kuthumi put her international knowledge to work while interning for the New Hampshire World Affairs Council, researching and writing about news topics such as the impact of COVID-19 on developing nations, anti-racist movements in Indonesia, boundary disputes between Nepal and India and more. A 2020 Truman scholar and recipient of a TRIO scholarship, the Helen Duncan Jones Award and an Undergraduate Research Conference Award of Excellence, Kuthumi interned for the U.S. Department of State through the Washington Center. An invaluable learning experience, she researched international education news, analyzing data and meeting with students online to discuss higher education in the U.S. “I learned a lot about professional writing, public speaking and data tracking,” she says.

Kuthumi has applied for several fellowships after graduation: she’s a semi-finalist for the Fulbright English Teaching Assistant program in India and a Henry Luce Foundation scholarship. No matter what her career choice, she believes her liberal arts education leaves her prepared. “COLA has helped develop my ability to think critically, write and communicate,” she says. “The skills I’ve gained are invaluable.”