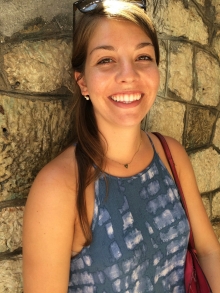 Tell us about yourself and where you are today
-My name is Ali Kessler and I graduated from UNH Durham in 2016 with BA in English and in 2017 with a Master's of Teaching in Elementary Education. During my undergrad years, I continued my studies of French and my love for the language grew and I decided to minor in the language! At this point, I am combining my love for teaching children and for the French language as I prepare to head back to France for this coming school year, 2017-2018, to work in a primary school setting teaching English to young French students.

-Studying a language influenced the way I read a variety of texts within my English and Education disciplines. Studying French, especially after studying abroad and being exposed to different perspectives, ultimately showed me that there are many different ways to listen to, read and comprehend the message someone is trying to get across in any form. For example, in English we say "I miss you" but the translation from French is closer to "You are missing from my life". I found myself reflecting on the differences between English and French in getting an idea across, and it helped me become more conscious of diction and syntax. I carry this with me today in my teaching too, especially to students who come from other countries, as I realize to what extent that there are different ways of listening and understanding a language depending on the way in which you speak to students.

Who is a language professor/instructor who had the biggest impact on you and why?

-When I chose to take a French course at UNH, it was initially to fulfill a language requirement. My intention was not to continue studying French, but after my first semester freshman year course with Claire Hélène-Gaudissart, I found myself more intrigued with the language than ever before during my high school years. She was kind, helpful and made me feel knowledgeable in the course. She helped prepare me to tackle more verb conjugations and delve deeper into the language in more difficult courses.

-It's hard to nail down one favorite memory, but I learned to make the most of the beautiful city of Dijon, where I lived, rather than traveling every single weekend in different countries. My study abroad turned less into one big European excursion into a chance for me to delve deeper into the French culture in many different aspects. Embracing the French way of life became my goal, and all of those moments of discomfort, living life outside of my comfort zone, eventually turned into this blur of happiness where I realized I could in fact begin to blend and embrace living in a different country with a language barrier. The best memories include 9-11pm dinners with my host mom every evening discussing politics and the world, meeting other international students in my language immersion courses, being able to speak to cashiers and in restaurants with more fluency than I imagined and meeting native French speakers with whom I shared many laughs, an exchange of different languages and met my significant other, Hugo.

Why was language important to your UNH education? How has your language major benefitted you?

-Language became important to me during my time at UNH not because it was my major and I simply needed to fulfill courses, but because it was enjoyable to learn to speak French. It became even more important to me after my time abroad, after I realized how exciting it is to be immersed in a different place. I had no idea how difficult it would be to live in another country and how much of the language I had to learn still, especially from native speakers. It allowed me to pursue something for fun, on top of other coursework, and to help my brain grow per say.

Did you participate in a high-impact learning experience at UNH (study abroad, independent research, etc.?)

-I personally did not major in French or a foreign language, but I enjoyed my time minoring in French and would recommend to anyone the importance of studying abroad, and how exciting it is to study in a country where they do not speak your native language. What an opportunity to grow and learn a new skill yourself, especially if you live with a host family!

-My goals are to have my own elementary classroom someday, in either New Hampshire or Massachusetts, after spending an undetermined amount of time teaching abroad in France, and continuing to immerse myself in their culture and moving steps closer to my goal of fluency.