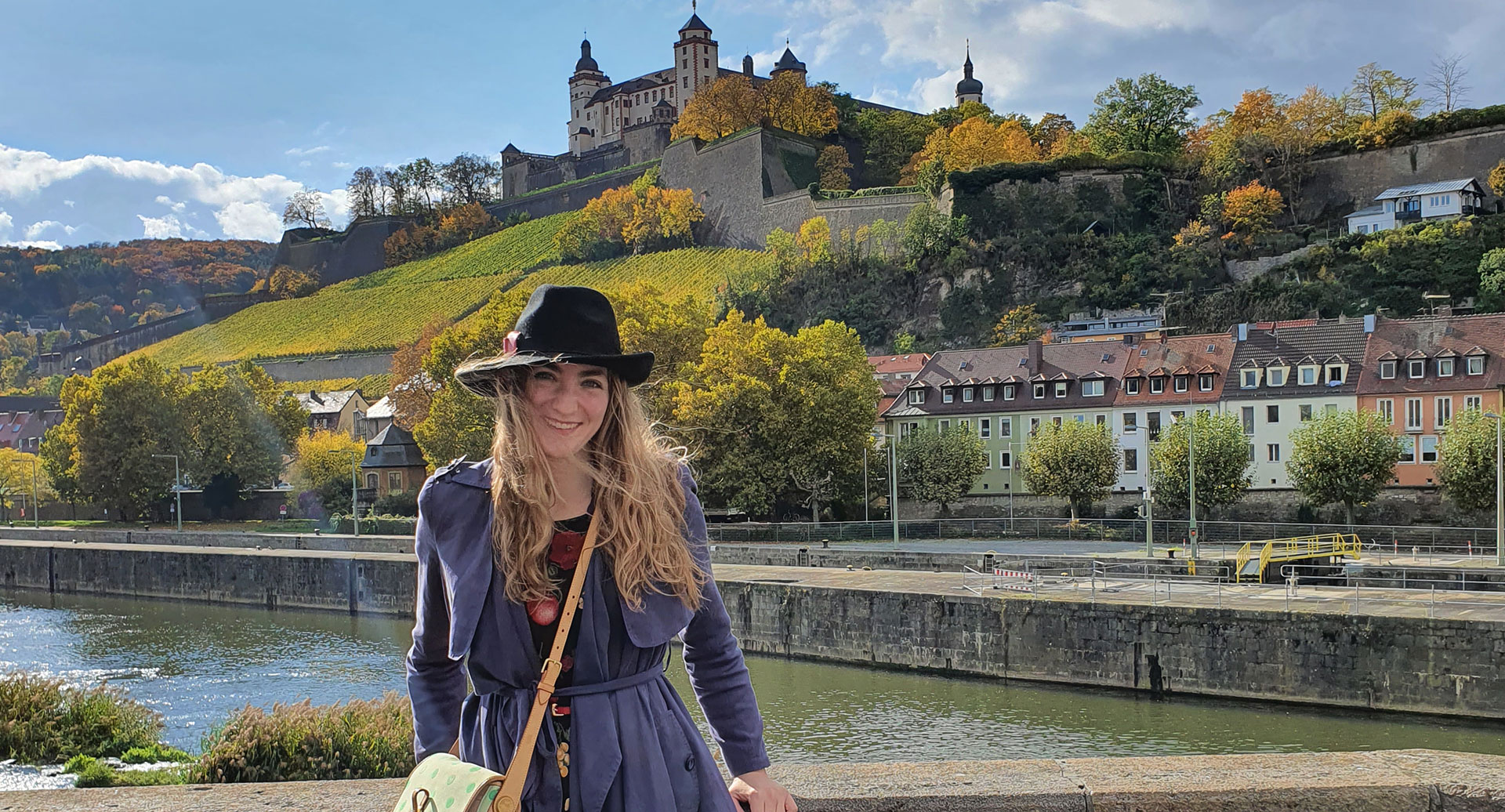 What are you currently doing for work or further education?
I am currently enrolled as a master’s student at the Julius-Maximilians Universität Würzburg and am in the last 6 months of my studies; I plan to stay here for my Ph.D. as well.  I had always wanted to move to Germany after my undergraduate studies so I could pursue graduate degrees and settle permanently in Germany. I moved to Heidelberg, Germany, ten days after graduating from UNH in May 2018.  I re-joined the lab I was a member of for an internship in the summer of 2017 at the German Cancer Research Center, but this was also just a 3-month internship. I had applied to a few master’s degree programs at universities in southern Germany but had not received acceptance from anywhere yet – it was nerve-wracking to move to a new country with such an uncertain future.  I received the acceptance from the University of Würzburg in August, four weeks before my internship ended, and one month later I moved to Würzburg to begin my master’s degree in biology, specializing in oncology and immunology.

How did your education in COLA prepare you for life after college?
Deciding to take on German as a major instead of a minor was arguably one of the best decisions of my life.  Before coming to UNH I knew Germany was my dream destination for my next steps, but I was uncertain of how I would be able to enroll in a German university as a non-EU citizen.  Upon studying abroad on the Berlin Summer Program in 2016, it became clear to me that Germany was going to be my next home after Durham, N.H., and that applying to and enrolling in a German university as a foreign citizen was not uncommon, nor was it too difficult. Having studied the German language before moving to Germany has made the entire process and my residency much easier and more comfortable than if I had not learned German. Not to mention, learning a language was a wonderful way to break up the rigor of the Genetics: Genomics degree.

What person or course most influenced you while at UNH?
I must credit the entire German Department at UNH for their motivation and enthusiasm in learning the German language. Although she is no longer at UNH, Professor Mary Campbell was the one who convinced me to take on the German major instead of the minor. I sat together with Professor Mary Rhiel (who has retired) to plan out my studies during my time at UNH. Professor Ed Larkin became my advisor soon after and kept me on track and did very well to push me to stick with German even when I felt like I couldn’t keep up with it. Professor Frank (also retired) was a lovely, energetic professor from whom I harnessed a lot of inspiration to move to Germany and pursue my goals. Professor Charlie Vannette came about midway through my time at UNH and was a huge supporter of my goals and maintaining my interest in not just the language but all of German culture. The last German course I took at UNH was with Professor Alex Holznienkemper with just two other students – I can’t think of a better class with which to end my German career at UNH, we were able to dissect modern German literature and even Skype with authors, and I’ll even go as far to say it’s the course where my German skills really sky-rocketed.  I’ll say it again: the enthusiasm of the German Department is what kept me going and to whom I credit much of my success to.

What do you know now that you wish you'd known while at UNH?
Moving to a new country alone is not an easy feat. No one tells you this, by the way – you simply learn it by doing it. Culture shock is a very real thing, and while not everyone experiences it, those of us who do experience it experience it very differently. For me it was a bit of a slow burn until I realized that some of my struggles could be attributed to the sudden change of no longer being in the country, culture and language that I was most accustomed to operating within. Moving to another country is not like an extended study-abroad program, but it is an opportunity to experience even more life-changing events and people. It is perfectly acceptable ask for and seek help when you need it, and maintaining a support system of both connections back home and in your new home is crucial.

What advice do you have for students interested in your field?
Learn as much of the language, any language, as you can. We native-English speakers have it quite easy in the science realm, as the language of science as it stands now is English. But knowing the language of the country you’re working in gives you such an edge with regards to colleague interactions, but also with finding part-time work and making friends outside of the lab. The more you integrate into your new home and build connections with others, the easier your life will be, and language is an excellent tool to accomplish this. Just do YOUR best and never give up – not on your language and not on your scientific pursuits!